Which Matters More for Credit Spreads: Fundamentals or QE?

What is more important for credit spreads in the current environment: the fundamentals or central bank actions? Our research suggests that since 2010 the answer has been central banks and, in particular, the US Federal Reserve.
Share this

All other countries
by Chris Rands, Portfolio Manager
21 April, 2016

Nikko Asset Management Australia’s fixed income team is continuing its effort to determine if credit spreads are close to the top (see the recent article ‘Is it time to get back into credit?’). In this article, we focus on what is more important for credit spreads in the current environment: the fundamentals or central bank actions? Our research suggests that since 2010 the answer has been central banks and, in particular, the US Federal Reserve (Fed).

In our view, the fundamentals don’t support a sustained improvement in credit over the long term. However, central bank actions and quantitative easing (QE) policies have been driving credit spreads over the past five years. Given that the Fed is now tightening, will QE from the European Central Bank (ECB) and Bank of Japan (BOJ) pick up the slack or will we see credit markets continue to follow the Fed? We believe that credit will likely benefit from the ECB stimulus, since central bank actions have mattered more than the fundamentals for some time. If the fundamentals were to turn positive, it would be an even stronger sign to buy credit; however, for the moment it remains a ’central bank trade’.

Fundamentals not yet pointing to a buy signal

To determine the credit outlook, we first assessed the fundamentals, which remain slightly negative and are not yet pointing to a buy signal—this data is somewhat lagged since it is released quarterly. In order to determine whether or not credit has negative or positive fundamentals, we focus on corporate profits and debt. Corporate profits are the key element keeping both leverage and debt serviceability in check. Fundamentals are positive when profits growth exceeds debt growth and vice versa. Chart 1 shows the difference between corporate profits and corporate debt, which has historically been a strong indicator of future spread performance. 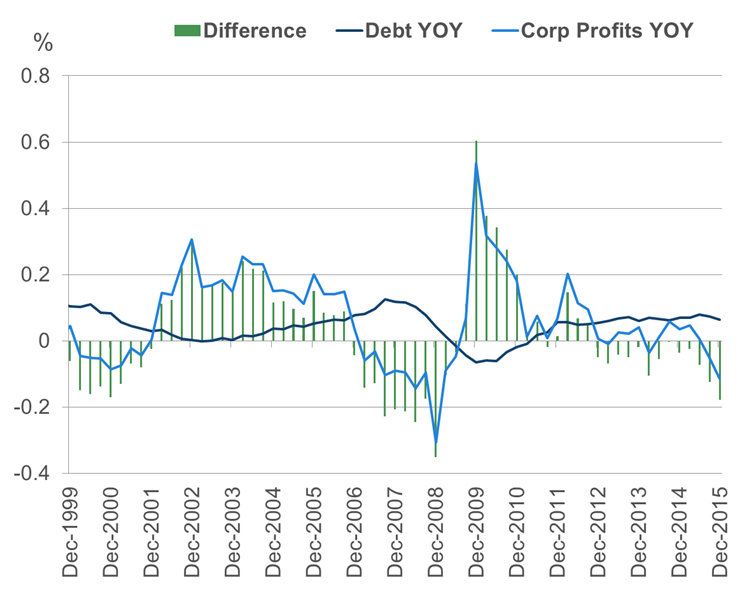 Using this data, we calculate a number called the ‘Z score’, which is the number of standard deviations above/below the mean, to represent credit conditions. We then plot the current conditions against the conditions six months previously to create a swirlogram, which is a visual representation of the credit cycle, with each dot being a point in time (see Chart 2).

As we can see, there are four distinct segments in the swirlogram shown in Chart 2: 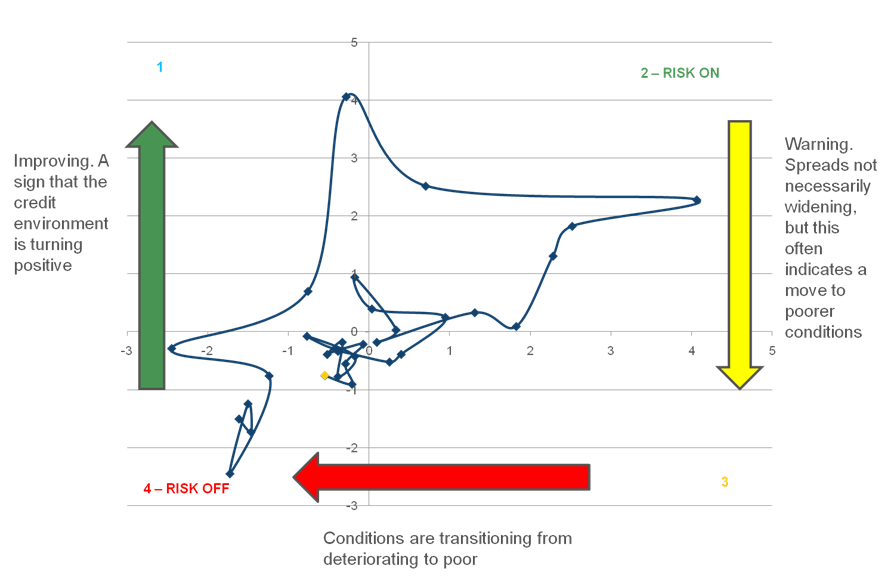 Using this four-segment approach, we mapped BBB credit spread performance against the timing of the cycle. As Chart 3 shows, this fundamentals indicator suggested a buy signal for credit for most of the 1990s, until a strong sell signal in 1998. It then recommended re-entering credit in 2002 and exiting in 2007. Following the GFC, the signal to re-enter credit came in late 2009, missing a lot of the contraction in 2009 but catching the last 100 basis points (bps).The caution and sell signal then went off in 2011/2012 and this was inaccurate. 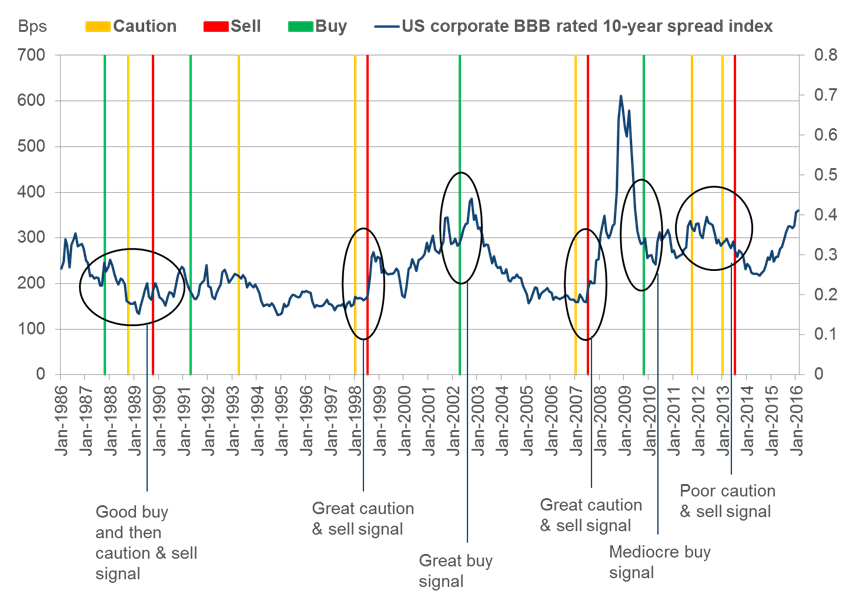 Despite performing well since the mid-1980s, this indicator has not been working since 2010—it has mostly indicated it was best to be short credit. To improve the accuracy of the indicator, we decided to look for large changes in the Z score, which would signify that there was a shift occurring in the market (see Chart 4). This has historically performed well at indicating the best timing for entering/exiting the credit market. Investors that bought credit during the times indicated by the green bars in Chart 4 and then sold during those indicated by the red bars would have been relatively successful in timing the cycle. Unlike in Chart 3,this approach catches the positive change in 2012 which was due to QE, although there is no exit signal in 2014. 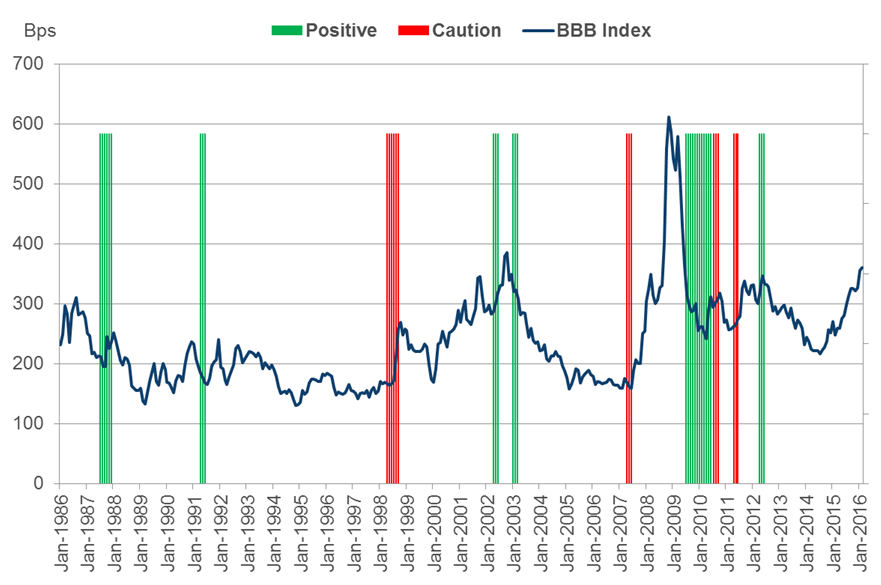 Using the magnitude of change in Z score is more successful than the fundamentals swirlogram because it picks up the trend 3-6 months earlier than waiting for the segment change. Take early/mid 2009 for example—there was a huge improvement in conditions (-2.5 to -1), but it was not quite confirming a positive environment (as it was still <0).

Extending this to the start of 2012, we also saw a significant improvement in this indicator (0 to 1), which was due to a spike in profits related to QE. However, over the next 12 months the trend reverted back to its previous course and eventually slipped into negative fundamentals. In this regard, QE seems to have delayed the trend rather than change it. There was no sell signal in 2014 because there was no large decrease in fundamentals, just a slow shift back to negative. We have not yet moved out of this phase so there is no signal at the moment (buy or sell).

It appears that the indicator worked well for the corporate credit cycle for 20 years until 2010, at which point its ability to predict turning points reduced substantially. Does this mean that we are in a brave new world where low profit growth and high debt no longer matters? In our view, this is unlikely. We believe that QE is the culprit and is distorting the buy/sell signals based on fundamentals that we might have expected to see pre-2010.

To determine the effect of QE, let us first consider the Fed’s reserve balance sheet. Chart 5 displays the six-month change in the Fed’s balance sheet (measured by the FARBAST Index) compared with BBB rated US corporate spreads. Since 2010, the Fed has basically led the market and the turning points in the Fed’s balance sheet levels seem to be a far better signal for BBB corporate moves than the fundamentals. For much of this period, credit investors would likely have been more successful by watching the Fed rather than trying to time credit moves based on fundamentals.

Chart 5: Six-month change in the Fed’s balance sheet vs. US BBB corporate index 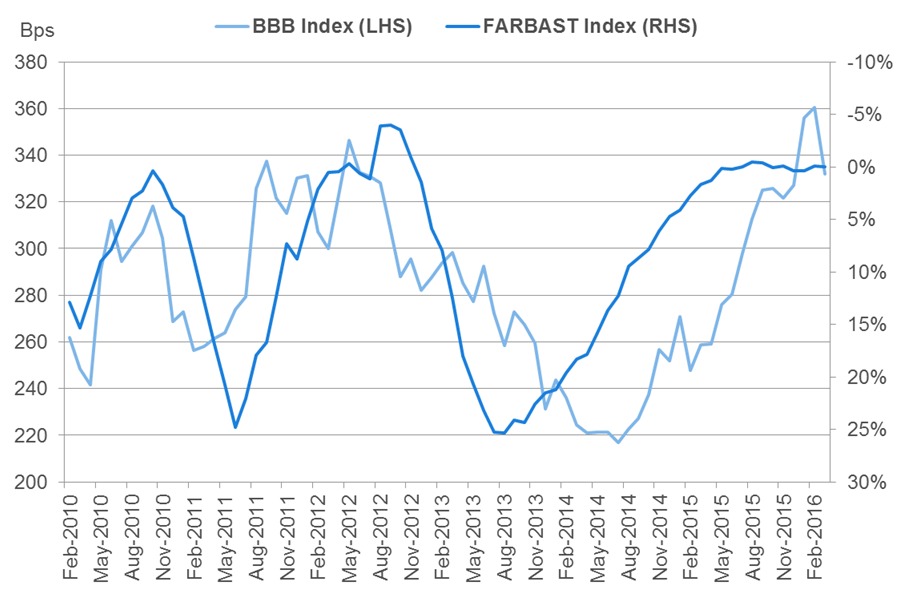 Since the Fed is no longer undertaking aggressive QE but the ECB is, does this mean that the ECB will take the Fed’s place in terms of driving credit spreads? In our view, it is difficult to say, since it remains hard to untangle what has been Fed-driven and what has been ECB-driven.

Chart 6 indicates that the Fed has been driving credit spreads in Europe, but up until now the ECB’s balance sheet has not. (Please note that the Fed scale is inverted and the ECB scale isn’t). While arguments can be made over which relationship is more important, the Fed could still remain the predominant driver.

In our view, credit spreads should, at least in Europe, benefit from the ECB stimulus over the short term. While Chart 6 shows that the Fed was more important in driving credit spreads, the fact that the ECB is targeting credit assets should directly improve their spreads. Additionally, QE has mattered more than the fundamentals for some time. We will probably see a rally until the ECB or Fed deems it safe enough to ‘take the training wheels off’, in which case the fundamentals will take front seat again.

At the moment, the fundamentals do not support a sustained improvement over the long term in terms of profits vs. debt. It also doesn’t appear that QE solves any structural economic problems—it just delays the cycle by temporarily affecting the prevailing trend. If the fundamentals indicator were to turn positive, it should signal that credit is becoming attractive. However, for the moment it remains a ‘central bank trade’.