Our global strategist sheds light on how corporate profit margins are reflecting the continuing improvement of corporate governance in Japan.
Share this

All other countries
by John Vail, Chief Global Strategist
02 March, 2016

Given the 4th quarter slowdown in the global economy, it is no surprise that overall corporate profit margins in Japan decelerated during that period. But before one panics and says that they are about to plummet, one should realize that it would likely require a global recession for such to occur and that the 2005-2007 period showed that profit margins can plateau at a high level for an extended period of time. Indeed, the four quarter average is still creeping upward to new record levels, and like most of the rest of the world, the manufacturing sector is declining while the non-manufacturing sector is accelerating to record highs. Meanwhile, Japanese profits are performing much better than those in the US or Europe. We have covered the reasons for such in our recent piece The Japanese Equity Outlook After the Nasty New Year Start, but let us emphasize herein the corporate governance aspect of that piece.

The fact remains that, partially due to the encouragement of the Abe administration, Japanese corporations are continuing their structural shift towards improving profitability. This is "icing on the cake" of the "Show Me the Money" corporate governance improvement that we have long-highlighted in our thought leadership effort on Japan. Indeed, while increasing the number of independent directors and other recent governance issues are very important in the intermediate term for Japan, it is crucial for investors to understand that much of the profitability message has actually been understood by Japanese corporates for a decade. This is shown by the divergence in the profit margins from the trend in GDP growth in the chart below, showing that even though GDP growth has remained subdued, profit margins have surged. Since the Koizumi era, Japan has embarked on major rationalizations in most industries, with the number of players often reduced from seven down to three. The fruits of this restructuring were slower to ripen than in Western world examples, and they were hidden by a series of crises (the Lehman shock, the turbulence in China, the strong Yen and of course, the Tohoku crisis), but since Abenomics began, the global backdrop for Japan has been stable and there have been no domestic crises, thus allowing the fruits to ripen.

The CY4Q15 data on overall corporate profits (not just of listed companies) recently announced unsurprisingly shows some flattening of this upward trend, with pretax profit margin's four-quarter average hitting the slightly higher new record level of 5.36%. We expect that profit margins will flatten in coming quarters, partially driven by continued industry rationalizations and cost-cutting, but also negatively impacted by the stronger Yen. As mentioned above, the profit margin of services industries also surged to a new record high, as shown in the second chart below. 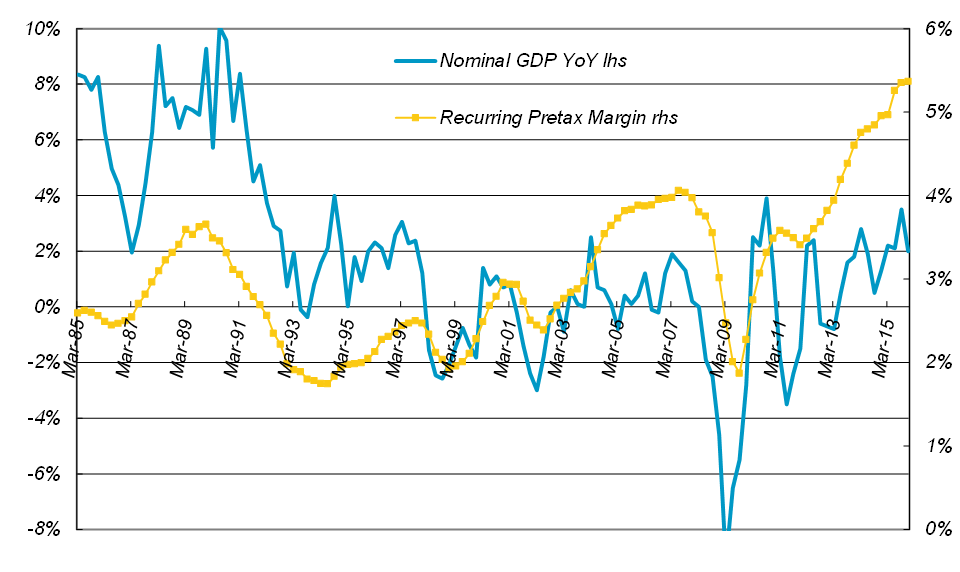 ...and for Non-manufacturers excluding financials 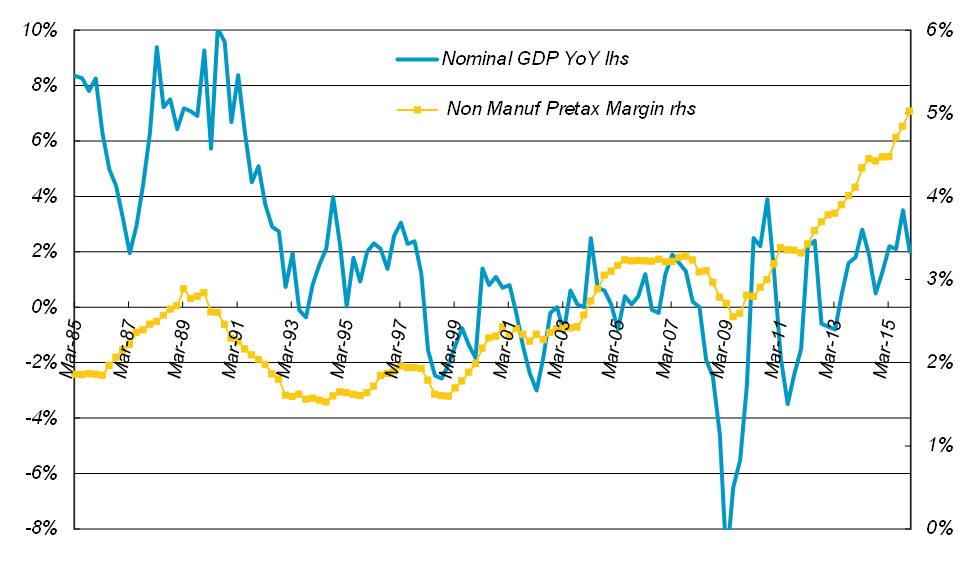 One should also note that Ministry of Finance statistics do not cover post-tax income, and due to recent corporate tax cuts, the overall net profit margin is likely expanding significantly.