US monetary policy grows less independent as 2016 unfolds and risks to global growth abound in a rebalancing China, a deflationary struggle in Europe and whispers of a Brexit.
Share this

All other countries
by Roger Bridges, Global Rates and Currencies Strategist
09 March, 2016

Between 17 December when the US Federal Reserve (Fed) started its rate tightening cycle and the end of February, US 10-year Treasuries have fallen by 49 basis points (bps), with the fall in the real rate representing some 90% of the total fall. The US 2-10 year yield curve has also been flattening as the market re-prices the 5-year bond to reflect the view that the US Fed will only be able to raise rates very gradually. Over the same period, the S&P 500 equity index has fallen by 5% and the US dollar has depreciated by 0.7% (according to the Bloomberg USD Spot Index).

These recent movements might seem strange given that US economic conditions are reasonably positive, with unemployment at a record low and wage inflation finally picking up. However, they reflect the fact that markets do not believe that the US can 'go it alone' while the rest of the world continues to struggle, particularly with Europe having fallen into deflation again in February. In fact, the German 10-year Bund rate also fell by 49 bps over this mid-December to end-February period, suggesting that US 10-year bond movements continue to be largely driven by the Bund rate.

Did the Fed strike too soon?

The Fed started to raise rates in December despite a number of headwinds. It is the first time in history that the Fed has raised rates with the US Institute for Supply Management (ISM) Manufacturing Index below 50 points, US corporate profits falling and credit spreads increasing. At the start of the tightening cycle in December, financial conditions were already tighter than at any time since the global financial crisis (GFC), mainly due to a stronger US dollar. Given the traditionally negative correlation between oil and other commodity prices and the US dollar, the Fed's tightening policy has been affecting commodity producers at home and overseas, thereby negatively affecting equity markets.

Quantitative easing (QE) effectively acts to 'front-load' equity performance. As the Fed moved to tighten, with initial expectations of four further rate hikes in 2016, equity markets began to focus on the credibility of current valuations, especially since investor expectations were that it could negatively affect the US economy. The US economy had already been losing momentum since 2014 and while, in our view, a US recession seems highly unlikely, equity markets are generally more 'jittery' about US growth as a result of these valuation questions.

Two of the key purposes of the Fed's QE programme were to stabilise risk assets and help equity market performance by effectively 'buying' performance from the future. Cutting interest rates basically works in the same way as QE, increasing growth today by buying from the future. This may have worked well in the past when helping today's growth seemed to generate its own velocity, such that the Fed had to subsequently tighten rates to slow down an economy before inflation became a concern.

However, we no longer seem to be able to generate that kind of velocity in terms of economic growth to propel us forward. Some market commentators have speculated that potential growth rates have fallen, which is why the US has around 5% unemployment despite fairly low growth. US growth has remained fairly stable at around 2% since 2011, which in historical real terms is very low for a growing economy.

Countries outside the US continue to pursue easier monetary policy to help kick-start their economies and weaken their currencies. The Fed's tightening cycle should only increase the effectiveness of this policy. However, this type of competitive devaluation is a 'zero sum' game, with the US dollar the eventual loser. Several months ago, markets were questioning whether the US economy could grow fast enough to drag other countries along, without endogenous growth picking up outside the US. More recently, that question has changed to whether growth outside the US is fast enough to allow the Fed to tighten any further, without causing the US economy to slow or possibly stall.

In our view, the Fed wants to normalise interest rates, but given the situation in Europe and the fact that China (the major growth driver over the past 15 years) is rebalancing and needs strong external growth to help this process, it may find it is unable to do so. With the European Central Bank and now the Bank of Japan (BoJ) pursuing negative interest rates, an increasing percentage of global investment-grade bonds are trading at negative rates.

Nominal yields on US Treasuries look low, with 10-year breakeven inflation priced at 1.43% and real yields at 0.3%. Chart 1 highlights the strength of the correlation between US Treasuries and German Bonds (at around 0.94). Contrast this with the rolling correlation of the US 10-year Treasury yield to an US activity indicator such as the Citi Economic Surprise Indicator — not only is the correlation weaker, but it has recently slipped into negative territory. These correlations highlight the fact that global bond markets are very inter-linked and that US 10-year Treasuries are currently being driven by Bund rates rather than by the direction of the US economy. 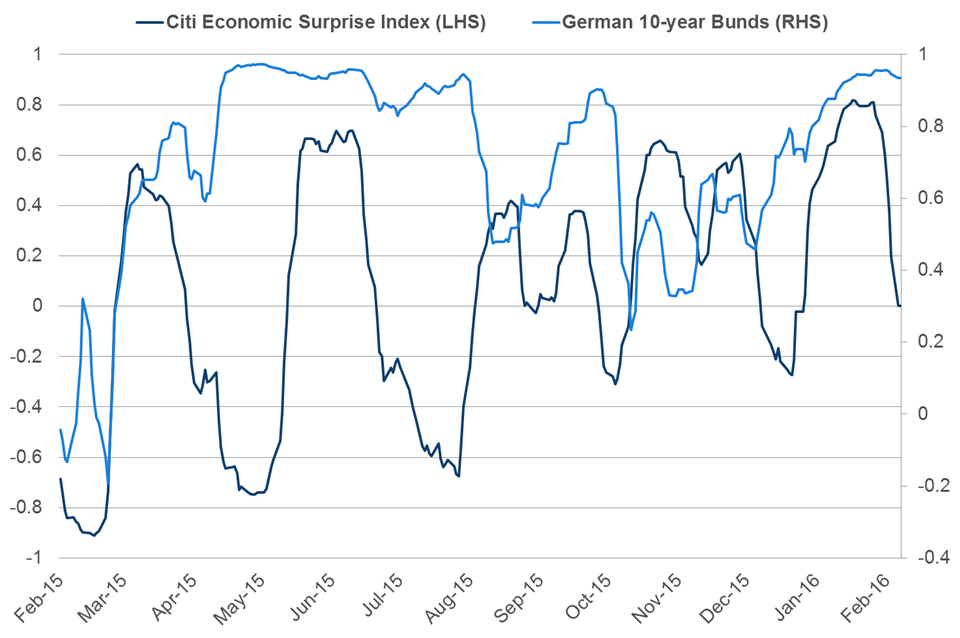 Following a Fed rate hike, one would generally expect to see US 10-year bond yields rise. The fact that US 10-year yields have fallen in line with German Bunds since the Fed's first rate rise demonstrates that Bund yields still dominate US long-end yields, as they have since 2014. With investors facing negative rates in many countries around the globe, it is likely that high yielding dollar-bloc sovereign debt (such as Australia, Canada and New Zealand) will prove increasingly attractive.

Bank shares are also being affected by negative rates, with the market understandably fearing that they will hit bank profits. The underperformance of bank shares compared with the broader equity market began in Japan after the BoJ's negative rate announcement. However, the contagion has spread to Europe, whose banks were already reeling from non-performing debt concerns and the underperformance of some of the larger banks. Europe's credit-generating process is reliant on the banks and so this is likely to be negative for European growth.

Conclusion: Globalisation has made US monetary policy less independent than in the past

The market currently believes that the Fed is becoming more dovish, but if risk assets do start outperforming as a result and the Fed then takes the opportunity to tighten, we could see this whole cycle repeat, with further market volatility. One way to stop the volatility would be if markets determine that the rest of the world is growing strongly enough for the Fed to tighten. With the Chinese economy rebalancing and Europe continuing to struggle with deflation, banking problems, refugee issues and a potential Brexit, this remains doubtful.

The Fed wants to normalise rates but given the continued dominance of the US dollar and the globalisation of markets, we believe that US monetary policy is less independent than it was, especially when other countries are all going in another direction. In our view, we will have to wait to 2017 for another US rate rise, with US long rates continuing to be at the mercy of QE in Europe and Japan.