It's All About the Dollar

In our view, the USD will soften when the Fed comes to accept the reality of slow-to-no growth globally and becomes more dovish in its language and approach.
Share this

The January Barometer, first mentioned by Yale Hirsch in 1972, suggests that a weak stock market in the month of January bodes ill for the rest of the year. Despite a last minute 'relief rally' occasioned by the Bank of Japan cutting interest rates to negative, equity market performance in January 2016 was the worst since 2009. So believers in the Barometer might be forgiven for being somewhat concerned.

It is the third explanation that comes the closest to hitting the mark, as all these market gyrations can ultimately be traced back to the 'King Dollar' regime that we have seen since mid-2014, when the Fed began to forecast a slow rise in interest rates starting around mid-2015.

Reasons often cited for lower oil prices are falling global demand, particularly from a slowing China, supply shock, rising inventories, and OPEC (Organization of the Petroleum Exporting Countries) being effectively dead. Although clearly some of the factors are playing a part, others are rather less convincing purely based on the data. For example, China's demand has not fallen — it actually rose by 8.7% year-on-year in the first 11 months of 2015 according to the US Energy Information Administration (EIA). In addition, EIA estimates that world consumption of oil rose by 1.4% in 2015. The fact that OPEC has effectively stopped functioning has been old news for over a year and thus well discounted by the market.

The beginning of the collapse in oil prices correlates very closely with when the US dollar (USD) broke out of a long range-bound trade in the middle of 2014 (see chart below). Although correlation does not necessarily imply causation, for 18 months we have seen commodity prices fall as the USD has strengthened. Since oil and other commodities are priced in USD, we would expect some impact on commodity prices from USD movements. Historically, a strong dollar has led to sharply lower oil — 1980-1985 and 2000-2005 are examples of similar episodes. Although the media are very good at offering a variety of stories to explain oil’s collapse, the explanation that seems to be the most valid is simply the return of 'King Dollar'.

US dollar index vs. Crude oil index (inverted) — in USD 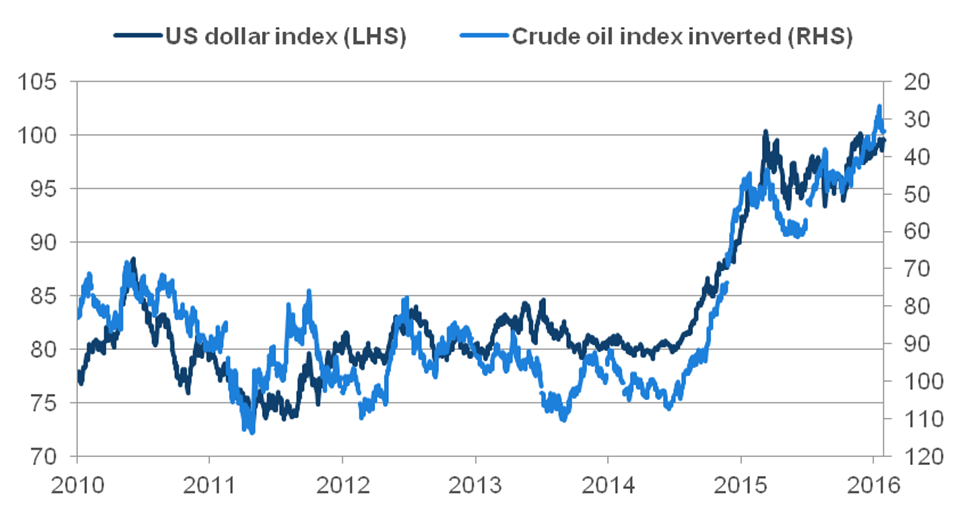 'King Dollar' also explains the troubles in EMs. Every time the USD surges, there are EM crises, from the Mexico Tequila Crisis in 1994 to the last Asian Crisis. The economic reasons why a strong USD causes weakness in EMs have been well documented, particularly the fact that it makes USD-denominated debt more costly to repay. Leverage has climbed in energy related lending and EM debt related to the commodities boom, but the silver lining is that it is well publicised and accounted for, making a negative surprise much less likely.

If 'King Dollar' is the strongest explanation for oil price declines, recent EM crises and China currency policy fumbling, then what is the root cause of its strength? It's clearly the Fed's tightening policy. Even though we have only experienced one minor hike so far, talk of steady rate rises, the 'dot plots' and the significant rise of real interest rates actually makes the true level of tightening since mid-2014 much more pronounced and painful than it looks.

The strong USD is keeping inflation rates and inflation expectations subdued, which is having a significant impact on real rates. The CPI in the US was close to zero throughout 2015 — so while US 10-year bond rates are flat at about 2%, real rates have gone up substantially. This makes US corporate debt service much more expensive in light of a deflationary environment.

It is also having an effect offshore. Because the USD is still the undisputed reserve currency and global debts are still denominated in it, the strong dollar implies dollar scarcity. This equates with global monetary tightening, especially for EMs where trade is in dollar terms. Over 2015, as inflation has fallen, there has been a significant rise in real rates globally.

In our view, it largely comes down to the Fed. The current crisis will persist and may become a full-blown bear market if the Fed decides to implement consecutive hikes as it indicated in December 2015. Although it has stated it believes the effect of lower energy prices to be transitory, if consumers believe the price will be permanently cheaper, then lower inflation expectations are likely to result in a further rise in real interest rates, affecting all borrowers. In effect, the true level of tightening has been substantial in the last 18 months since oil's collapse and now we are seeing the economic and profitability fallout.

It is unlikely that the Fed will be able to follow a path of consecutive rate hikes. In our view, the USD will soften when the Fed comes to accept the reality of slow-to-no growth globally and becomes more dovish in its language and approach. In the past few weeks, there has been increasing talk of a 'policy error' from the Fed. If equity markets stay low as they are now or fall even further, these voices are going to get louder, perhaps even becoming self-fulfilling. It reminds many Japanese investors of the repeated pullbacks from quantitative easing over the last two decades, which was the Bank of Japan's gravest policy error, contributing to the lost decades.

In our view, the Fed will blink, just as President Mario Draghi has hinted the European Central Bank will do and as the Bank of Japan did at the end of January by cutting interest rates to negative. This should be positive for global equity markets and may help us avoid the grim year that January has suggested.