All other countries
by Naoki Kamiyama, Chief Strategist
05 February, 2016

On January 29, the Bank of Japan (BOJ) decided to adopt “quantitative and qualitative easing with negative interest rates” at its first Monetary Policy Meeting of 2016. The BOJ is aiming to achieve a price stability target of 2% and intends to continue monetary easing measures as long as they are needed to stably maintain this target. Negative interest rates have already been adopted in Europe in order to eliminate deflation and economic slowdown concerns, and the BOJ has now followed suit. 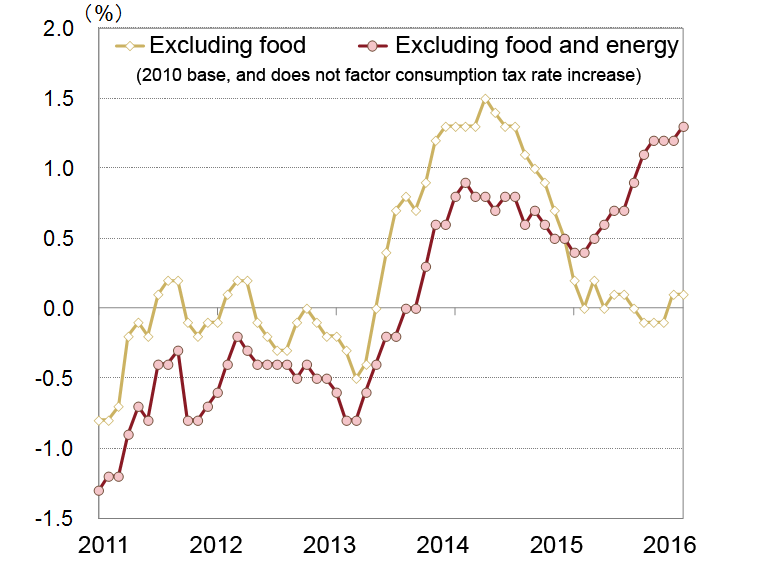 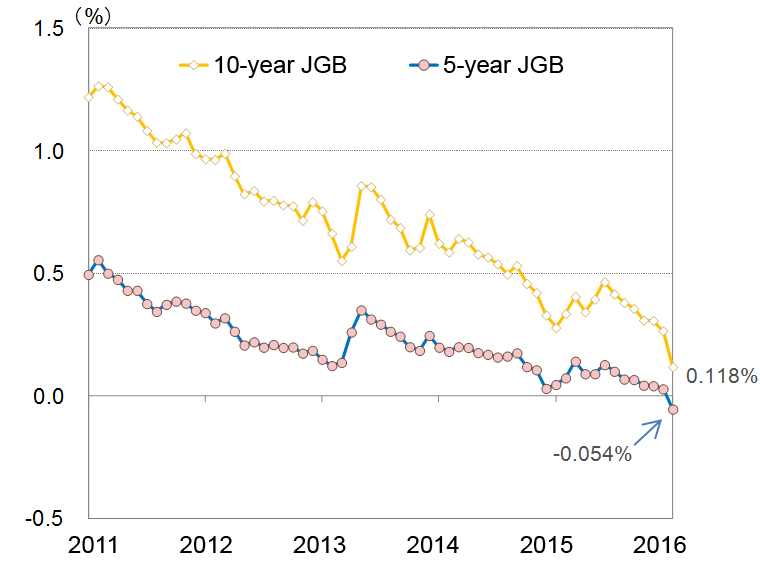 (Created by Nikko AM based on data deemed reliable.)
* The above graphs are based on past data and do not guarantee future performance.

The impact of the decision was shown in closing prices on Japan's main markets, with the Nikkei 225 climbing ¥476 from the previous day and the yen falling to the ¥120 level against the US dollar (yen depreciation/US dollar appreciation of more than ¥1 from the previous day). In the bond market, yields on JGBs with maturities up to around eight years dropped below 0%. After 3 pm, yields on 10-year JGBs were at a record low of 0.118% and those for 5-year JGBs were down to -0.054%.

This policy change by the BOJ is a positive in terms of maintaining and strengthening the inflation expectations that have begun to flower. This is partly attributable to external factors amid lingering deflation concerns around the world due to lower crude oil prices, including the possibility of the pace of US interest rate hikes slowing down and the high readiness of the European Central Bank (ECB) to implement additional easing. Another reason is the state of the domestic economy, in which export volume from Japan is showing a lack of clear growth and thus failing to boost production.

With most market participants failing to anticipate such action, the timing of this additional measure was a surprise, and this created a powerful “announcement effect” highlighting the BOJ's close monitoring of the economic environment and its strong commitment to its 2% inflation target.

Furthermore, as adopting negative interest rates is a “stimulus” policy, this will demonstrate the BOJ's determination to throw off concerns that it has run out of policy implementation options after a period of concentrating on JGB purchasing. The BOJ seems to be taking the right approach to its aim of maximizing the effects of its policy to stimulate inflation.

On the other hand, as the inflation target policy functions to “encourage expectations”, attention will be focused on how market participants react to this change in interest rates. The day of the announcement saw substantial stock market price fluctuations, with concerns over lower profits for banks jostling with eased concerns over yen depreciation. While the foreign exchange market is showing deference in the immediate term with the yen having weakened and the dollar having strengthened, the change is being poorly digested at this stage overall. The fact that the BOJ adopted negative interest rates after a vote in which five were in favor and four were opposed suggests that opinion is divided even within the BOJ.

A possible adverse effect of this policy is that it could serve only to hasten declines in the profits and functions of banks, particularly if the global economic recovery centered in the US fails to progress as anticipated. And if inflation expectations fail to strengthen even with easing measures extended to include the adoption of negative interest rates, the inflation target policy itself is likely to start functioning poorly.

Having judged this policy change to be a positive for the time being, from now on we will closely watch whether market participants emphasize rebalancing their portfolios to favor stocks over bonds, and whether banks take a more positive stance toward lending. As both scenarios require increased trust in the global economy, we need to proceed with caution.