What is the Outlook for the Yuan?

Our Singapore fixed income team expounds on the outlook for this clearly globally important factor.
Share this

The current depreciation trend of the RMB against USD should be seen as a broad-based depreciation of the RMB and not bilaterally to the USD. The trend started from the second week of November 2015, and it is clear that the move was planned well ahead and engineered in a streamline fashion. We see the adoption of a weak FX policy as a byproduct of the overall monetary policy easing by the PBOC that needs to be accelerated to support growth as well as the moribund stock market. This means that the weakening of the RMB will be managed in a "controlled" fashion to avoid a free fall, which explains why the regulators have suspended or tightened rules in some cross border FX activities such as the RQDII scheme and lending of RMB to offshore market.

Why we believe the RMB depreciation policy was a policy engineered in a controlled fashion can be seen in three major events in late 2015: 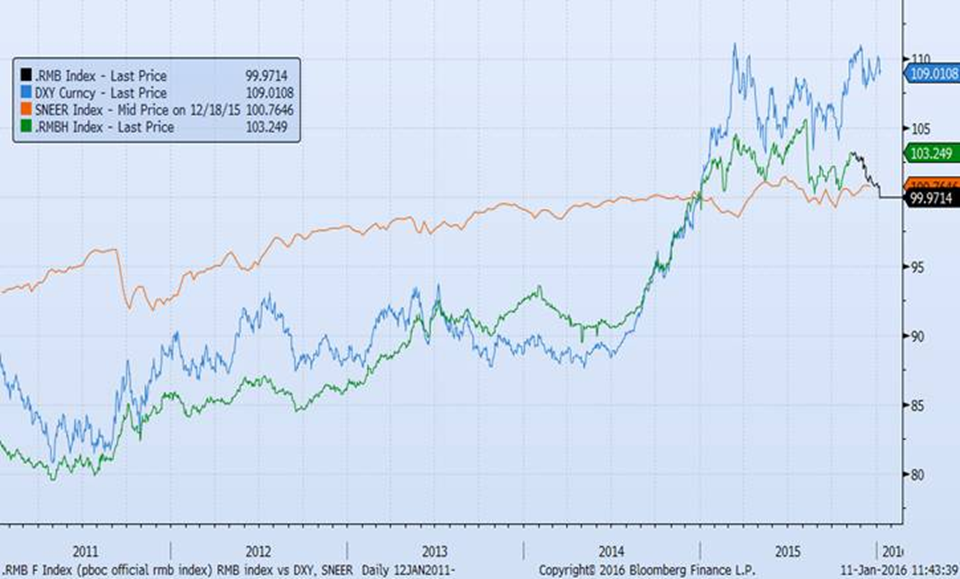 Policymakers most likely have a target for how much the RMB would be allowed to weaken against a broad-based basket of currencies in the medium term e.g. 3-6 month horizon before it evaluates the desired impact on the economy and markets. Thus far, from its peak in early August, the RMB has already weakened by 5.6% against the basket. This brings the RMB back to the level where it started the year in 2015. We believe there will be a pause now but since the trend started from August, we would assume by February, policymakers have to decide again whether there is a need for further "controlled" depreciation of the RMB against this basket.

In our view, as the economic outlook remains nebulous, there is a better than 50% chance to see a further 3% depreciation of the RMB against its basket. During this interim, we expect measures taken to control the cross-border capital flows will remain in place, which will continue to place more pressure on the offshore CNH market vs. the onshore CNY market. The objective to converge the two currency markets would therefore be further delayed although a firm timeline to achieve this convergence is set by the IMF's target to effect the RMB's inclusion into the SDR basket by 1 October 2016. In other words, the PBOC has to stabilize the RMB FX market before this timeline. Allowing a deeper RMB depreciation to "over correct" itself may become a last resort if confidence is not restored by the end of Q3 2016.