Looking forward, even though inventories were revised higher, their long depletion means they remain far too low in my view, and should continue start to rise significantly in the quarters and years ahead.
Share this

All other countries
by John Vail, Chief Global Strategist
10 December, 2015

I have long encouraged equity investors not to emphasize Japanese macro data ( http://en.nikkoam.com/articles/2015/11/economic-disappointment-in-japan-should-not-worry-equity-investors), but because the swing in 3Q data from -0.8% QoQ SAAR to +1.0% was so large (with the previous data implying a technical recession), and this was mainly due to the inventory effect that I have long propounded as mysteriously negative, I will briefly comment on it.

Firstly, much of the QoQ growth increase came from the downward revision to 2Q data, without which, the 3Q gain would have been only 0.3% QoQ SAAR. Stated in another way, the upward revision of the 3Q was only 0.2% from its original number. Within this, inventories were revised up very sharply (as were 2Q inventories), such that they now show inventory accumulation in both quarters, while the original estimate of 3Q inventories showed a large draw in Yen terms. Indeed, before this revision, it seemed like the countries had no inventories at all by this measure and as mentioned in the linked piece, without the inventory effect, 3Q GDP would have been 1.1% QoQ SAAR in its original estimate, so the current data is more realistic in our view and the negative trend in inventories seems finally to be breaking as shown in the chart below. 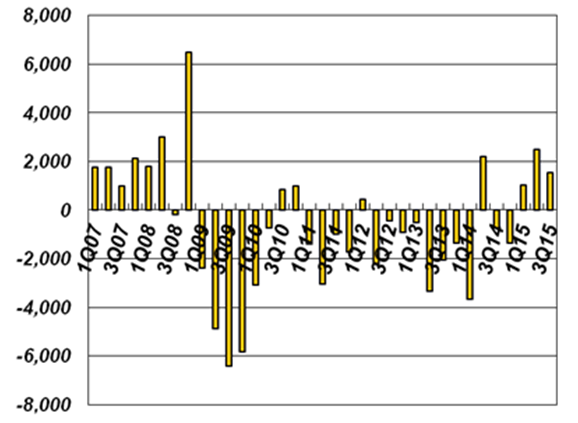 As for other GDP components, personal consumption was actually revised substantially down from its original release (as was the 2Q data, so the 3Q QoQ change remained positive), capex was revised up and government spending was revised sharply down in the 3Q from its original estimate, but once again the 2Q was too, so the 3Q government spending's QoQ change did not shift dramatically. Lastly, the discrepancy factor (between the Real GDP number and the sum of its components) was revised even higher, so the depressing effect of this on Japan's GDP remains very large. Either this latter factor will be revised away via upward future GDP revisions or a trend to a small discrepancy factor will boost growth in the quarters or years ahead. Either way, like with the historical inventory drawdown, Japan's GDP does seem quite understated.

Looking forward, even though inventories were revised higher, their long depletion means they remain far too low in my view, and should continue start to rise significantly in the quarters and years ahead. Along with faster growth in personal consumption, this should push 4Q GDP growth to 1.0% QoQ SAAR or perhaps even near 2.0%. Our view in 2016, however, is that growth will slow to 0.8% HoH SAAR in the 1H, but once again, equity investors should not be too concerned about this slow growth, as structural corporate governance trends and firm economic growth overseas are pushing corporate earnings even higher, while equity valuations remain very attractive.