Divergent monetary policy in US and Europe: Can it last?

As we enter 2016, we believe the divergent monetary policy theme will continue -- with the major risk to global bond markets and Fed rate rises continuing to be Europe.
Share this

All other countries
by Roger Bridges, Global Rates and Currencies Strategist
10 December, 2015
The major theme influencing fixed income and currency markets in 2015 has been monetary policy divergence. While the US Federal Reserve (Fed) has been signalling that it intends to raise interest rates before the end of the year, many of the world’s other major central banks have been easing policy by cutting rates or engaging in unconventional monetary policy, such as quantitative easing (QE). The European Central Bank (ECB), for example, is widely expected to loosen monetary policy again in December in an attempt to spur price gains and lift the Eurozone out of its deflationary spiral.

Although this theme of policy divergence is likely to continue for a while, we should eventually see a resynchronisation of monetary policy. Focusing on the US and European central banks, we examine why the divergence is occurring and what conditions are required for a return to synchronisation.

The current divergence reflects the different economic challenges facing central banks. The recent fall in commodity prices, particularly oil, is concerning to the ECB because it is proving to be a significant drag on inflation, which had started to pick up. By contrast, the Fed believes falling oil prices will only have a temporary impact on US inflation and is reasonably confident that it will gradually return to the 2% target. In addition, the ECB appears to be more concerned about the outlook for emerging markets (EMs) than the Fed due to Germany’s greater exposure to EMs.

One of the main effects of this divergence has been a significant appreciation of the US dollar, which is at levels not seen since 2003 and is starting to put pressure on the US economic recovery. In addition, US bond yields have increased dramatically compared with European yields and the US yield curve has flattened while the German bund curve has steepened. The question is, how long can this divergence last? Historically, European and US monetary policy movements have generally been correlated. The last time we saw such a large divergence was in 1994 when Germany was suffering a recession following unification. The US began to tighten monetary policy while Germany remained in an easing cycle.

However, the US’s actions in 1994 were in line with various other countries globally that were not in recession. This time, the US is on its own. As a result, we expect the Fed to act carefully to gauge how the economy is responding, particularly if the dollar continues to strengthen. The bank has been clear in its messaging on interest rates, stating that tightening will occur “at a gradual pace, adjusting policy as needed in light of incoming data1. The Fed will not want to tighten monetary policy too quickly if there is any chance that it could stifle the US recovery.

Scenarios for a return to synchronisation

In previous tightening cycles, central banks have moved together. This desynchronisation of monetary policy is testing both bond and currency markets since globalisation and larger trading blocs have tied countries to each other much more closely than in the past. In our view, the Fed’s ability to tighten rates is likely to be limited by other central bank’s policy actions. As a result, the current theme of policy divergence could continue for a while, but eventually we are likely to see a resynchronisation of monetary policy.

Scenario 1: Global growth starts to pick up or market starts to believe it will

This scenario may not seem that realistic given lower commodity prices, slowing growth in China and problems in EMs. However, we can’t rule out potential upside risk, particularly if markets start to question current asset pricing. For example, if the market starts to think that the ECB will be successful in its objective of increasing inflation, it would no longer justify a 10-year German bund yield under 0.5%. Inflation wouldn’t actually need to rise for a bond sell-off to occur — the market would just have to start anticipating a rise and, as a result, the possible end of QE. In this scenario, we could see a re-run of the March 2015 sell-off in German bunds which resulted in the steepening of curves around the world (see chart 1). 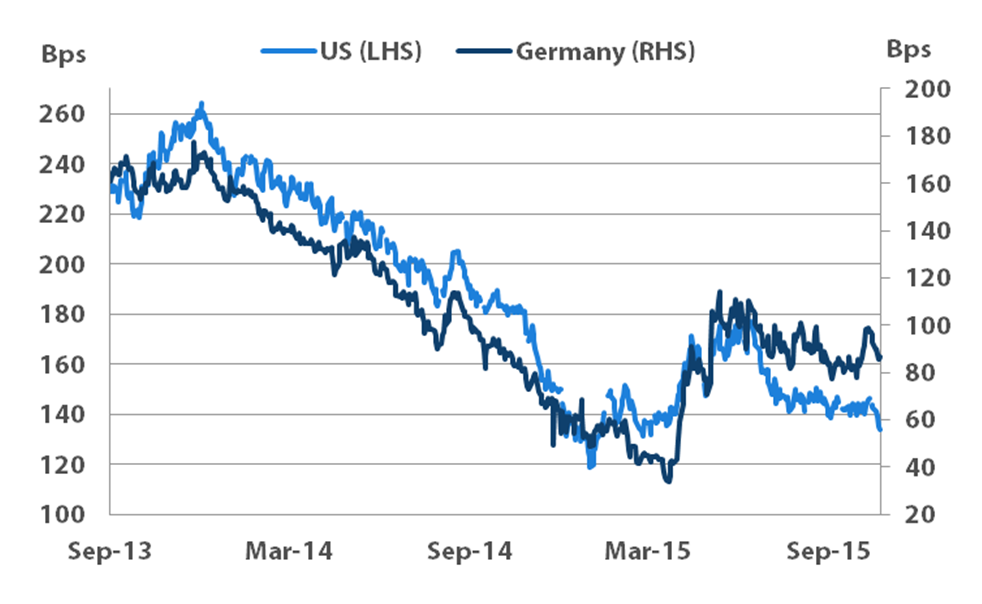 In addition to bond yield rises, it is likely that the Euro would start to strengthen while the US dollar would depreciate, potentially removing some of the Fed’s current concerns as monetary conditions eased. In such a scenario, fixed income markets globally could sell off with yield curves steepening. As a result, we could see other central banks start to follow the Fed’s lead, albeit with time delays depending on particular circumstances. In our view, this is less likely than scenario 2, but presents a potential risk to fixed income and currency markets.

Scenario 2: The Fed has to stop or reverse tightening

With Europe and Japan continuing to drive their currencies down via QE, the US dollar has been and is likely to continue to appreciate, which may start to negatively affect growth and in due course depress US inflation. At around 2.5%, GDP growth remains fairly anaemic and inflation expectations are falling due to lower oil prices.

US headline unemployment fell to 5% in October 2015, down from a GFC high of 10% in October 2009. It is unlikely to fall much further given that it is now at around the estimated natural rate of unemployment. Although this seems positive, much of the drop in unemployment is due to the fall in the participation rate. It is not just that the US economy is creating more jobs — there are also fewer people looking for them. As chart 2 shows, the percentage of people in employment in the 25-54 age bracket is not only around 4% below its pre-GFC peak, it is also below its 1993 and 2003 lows. 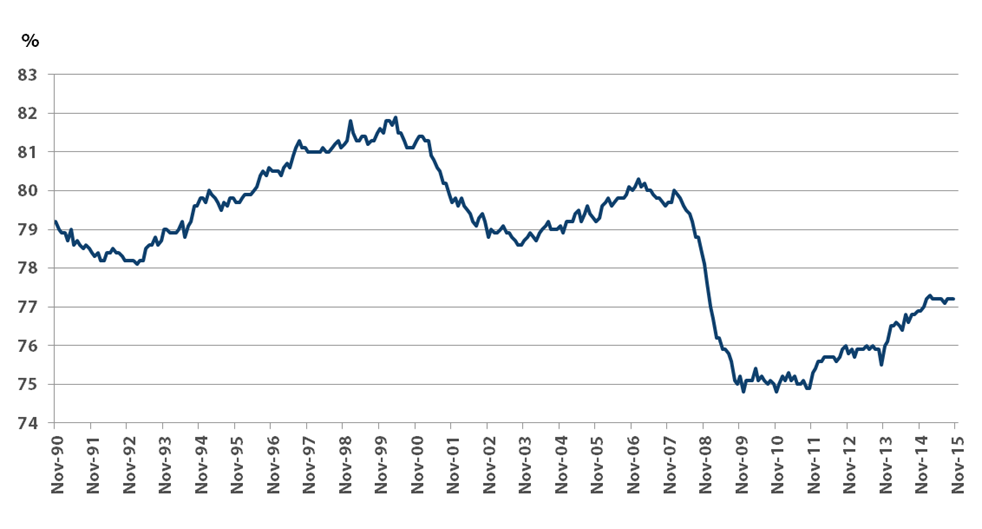 If we continue to see weak economic data globally, US growth doesn’t continue as strongly as the Fed expects or the high US dollar starts to derail the country’s recovery, it is possible that the Fed could resort to stopping its tightening cycle or potentially even reversing it.

Desynchronisation of monetary policy may be difficult to sustain

As we enter 2016, we believe the divergent monetary policy theme will continue, which should see US 10-year Treasuries trading between 2.1-2.4% since the Fed will be limited in the pace and extent of rate tightening due to events offshore. In our view, the major risk to global bond markets and Fed rate rises continues to be Europe. The Fed’s plans are likely to be delayed by events in Europe with the stronger US dollar acting as a headwind to the US economy, reducing the likelihood that the Fed will be able to raise rates very far or fast.