Our lead Australian fixed income portfolio manager discusses her intermediate-term outlook for the bond market “down under.”
Share this

In recent years, many investors have expressed concerns about rising interest rates causing negative returns for bonds, much like 1994's bond rout, especially given the surge in long maturity bond issuance. However, in the last two years, the trend towards lower bond yields has actually been strong as market participants continue to price in slower economic growth and lower inflation globally. Gross domestic product (GDP) growth continues to disappoint globally, particularly in China where its third quarter reading was the worst since 2009. Inflation is subdued globally, even in the US where growth has started to pick up. In our view, there is nothing on the horizon that suggests these trends will change in the short term, with many central banks still considering increasing quantitative easing or lowering interest rates.

Given this very low yield environment and our expectations for it to continue for some time, we don't expect Australian 10-year bond yields to increase significantly over the next year. In Australia, GDP growth should remain low as the economy continues to rebalance away from mining. With lower commodity prices and wage growth remaining subdued, inflation should also remain low. This reduces the likelihood of the Reserve Bank of Australia (RBA) raising interest rates, which should continue to keep Australian bond yields anchored at their current low levels.

Several factors suggest that GDP growth in Australia will continue to remain at low levels:

Credit growth: As with many other industries, financial institutions are facing increased regulation, which will lead to higher costs being passed on to consumers. All four major banks increased their variable mortgage rates in late 2015, blaming regulatory changes that require them to increase the amount of capital they hold against their home loan portfolios. This is likely to affect credit growth, which should take some heat out of the Sydney and Melbourne property markets.

Demographics: Australia has an increasingly ageing population, which will have a variety of effects on the economy. Ageing populations tend to spend less since retirees are more likely to limit their spending to accommodate a reduced budget. They will usually own a house and won't need to purchase household goods to fill it, particularly if they decide to downsize to a smaller dwelling. Another effect of slowing or no population growth is that it diminishes the need for new housing and hence construction spending is usually lower.

Spending: In terms of retail sales, trend growth remained fairly solid as of August 2015. However, there have been recent indications that house price growth could be starting to slow, with auction clearances moderating. According to a recent report by CoreLogic RP Data , data is “pointing to a moderation in growth conditions across Australia's largest city and the broader housing market”. If this is the case, it would potentially reduce the wealth effects from housing, which would likely reduce growth in retail spending, particularly in terms of household goods retailing. In addition, trend growth of real net national disposable income has declined to below zero. This means that the average household's standard of living is likely to be slowing or even falling, which could begin to reduce their consumption of goods and services (see chart 1). 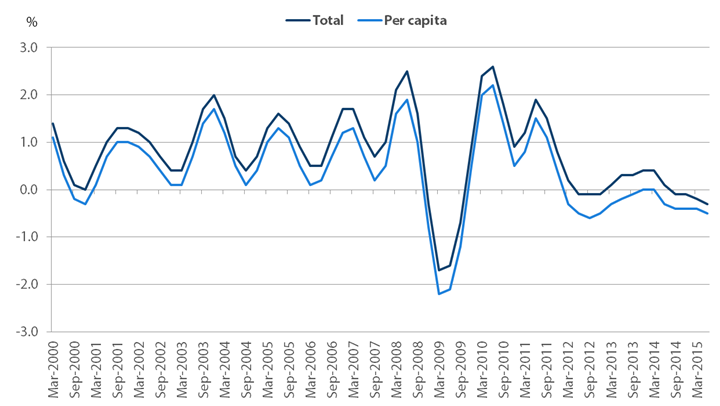 Capital expenditure: As with other developed economies, Australia is transitioning away from a manufacturing-driven economy, although the process is slow and often painful. There is an increasing move towards a more collaborative/digital disruptive, services-led economy, which reduces capital expenditure (capex). This is because most start-up/collaborative companies use freely available or low cost tools or under-utilised assets. For example, Uber doesn't own cars, their drivers do and Airbnb doesn't own real estate, their users do. Neither of these companies enriches the economy by spending money on physical assets. Although better asset utilisation is a form of productivity, it is not counted in the traditional measures of GDP, so the latter may not be measured accurately. However, this shift to services should decrease capex and construction in the future, which is likely to keep interest rates low.

The trend for GDP growth excluding mining (non-mining GDP) has been around 2% year-on-year using annual financial year data since 2005. Currently, non-mining GDP is around trend, so from a core point of view, the economy is doing reasonably well. However, as chart 2 shows, mining GDP growth has fallen significantly over the past few years. 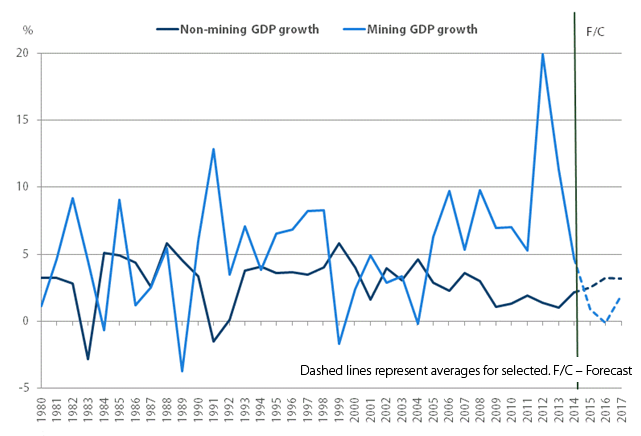 Thus, mining overstated GDP growth during the boom years, but now is likely understating it. What does this mean for bonds? When economic growth declines, central banks often cut interest rates in an attempt to reverse the trend since lower borrowing costs encourage companies to invest in new equipment and ventures. Lower growth is also associated with lower inflation – as demand for goods and services falls, prices often decline or at least remain flat. Additionally, in a weaker economy in which GDP, inflation and interest rates are low, investors tend to seek the perceived safety of government bonds. Corporate bonds become less attractive as profits are generally weaker and the potential risk of default rises. The resulting increase in demand for government bonds boosts their prices and pushes down their yields.

As chart 3 shows, 10-year Australian government bond yields have been just above non-mining GDP when looking at financial year-end data. So, if GDP remains stable or decelerates, it seems likely that 10-year bond yields may also continue to be subdued. 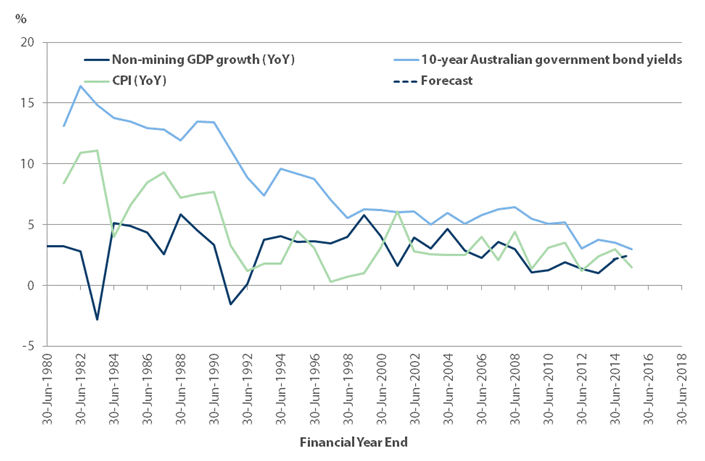 Another reason bond yields should remain low is that inflation is unlikely to rise significantly in the next few years. Liquidity has been growing, but increased banking regulation is reducing the amount of lending by financial institutions. Lower credit growth leads to a decrease in the excess supply of money, reducing the likelihood of inflation. In addition, the ageing population and the fall in real net national disposable income mean that demand pressures are unlikely to arise.

Conclusion: Lower growth should mean lower bond yields over the next few years

The RBA expects that the decline in the Australian dollar in response to declines in commodity prices should support economic growth going forward. However, non-mining investment has been slow to rise and is likely to remain subdued in the near term. In our view, economic growth in Australia will continue to be around trend for some time. Inflation is likely to remain low due to low population growth, lower commodity prices and subdued wage growth.

In our view, there appears to be little on the horizon that will lead to an economic growth surprise and the risks remain to the downside. As a result, rates are likely to remain low, particularly if the US delays raising interest rates and then raises them at a slower pace than market expectations. This should anchor bond yields at reasonably low levels and help to prevent any major sell-off in bonds. In addition, were the economy to perform worse than expected, bonds should help to offset any negative performance from risk assets since they generally perform relatively better in market downturns.

Anita joined the business in 2001 and is responsible for portfolio management, particularly in regard to core fixed income and cash, as well Australian sovereign debt.