Why the BOJ does not need to ease much, if at all

There are many reasons for the BOJ to defy consensus expectations for more easing.
Share this

All other countries
by John Vail, Chief Global Strategist
16 October, 2015

Most economists expect the BOJ to ease further, quite aggressively so in many cases, later this month or shortly thereafter. Certainly, Japanese economic growth does seem to be lackluster, with industrial production and machine orders recently forcing many economists to lower their 3Q GDP forecasts to near zero growth from the 2Q. But there are several reasons to be more sanguine about the situation. 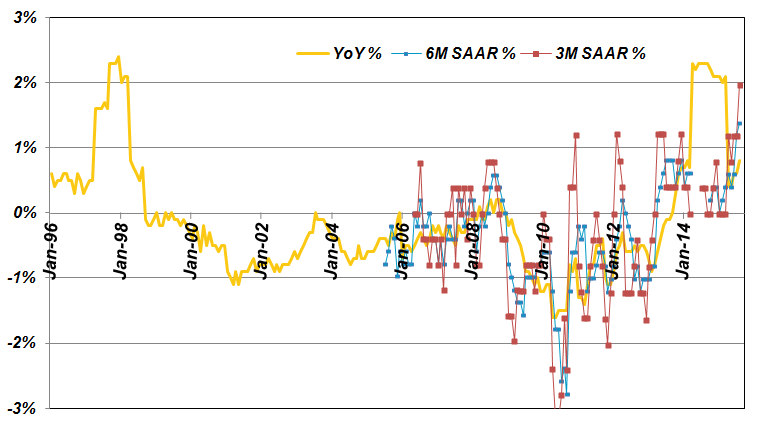 Source: Japan Ministry of Internal Affairs and Communications, through August, 2015

Secondly, there are several political reasons why Japan should avoid a weaker yen, which would be the obvious consequence. Already the US has been quite generous in not complaining about the yen at 120 against the US dollar, but there is not likely much tolerance for further weakening. US protectionist sentiment is rising and it is even questionable now whether the Trans Pacific Partnership (TPP) will be passed. Hillary Clinton, in stating her opposition to the deal, suggested that there was not enough effort on the foreign exchange component, and most Congressional Democrats would agree with her. In fact, a separate bill on monitoring foreign exchange matters had to be passed in conjunction with the Trade Promotion Authority in order to get enough votes for it to pass. A dramatic weakening of the yen would further harm the prospects for this major “third arrow” achievement of Abenomics, especially over the next three months before the US vote in TPP occurs. Lastly on the political side, Japanese voters are getting quite tired of inflation.

Thirdly, there are financial stability considerations. If Japan buys more JGBs and pushes long-bond yields even further near zero, then insurance companies, banks and other financial institutions, including pensions will complain that it is impossible to meet their long-term obligations with a reasonable amount of risk, as regulated by the government. Although there has been no major trouble so far, despite the fears of many doomsayers, an over-aggressive BOJ policy may unsettle the JGB market.

Many in the investment world are encouraging the BOJ to act, but from my readings of their thoughts, the BOJ would like to look past the short term considerations and count on wages rising enough to spur personal consumption, housing rents beginning to rise and Japanese corporations accelerating domestic investments instead of overseas ones. Indeed, the BOJ should be pleased that it has raised the standard core CPI from the negative annual rate extant since the late 1990s (except for a few months in 2008), at great risk to its reputation. Relying on a weaker currency or more aggressive monetary policy is not the key to success for Japan, but rather, continued structural reforms, including the TPP and components of Abenomics 2.0, corporation’s confidence in their own country and workers, and of course, a continued sturdy global economic backdrop.