Equity markets have been caught out by recent currency devaluations, as well as fear that central banks lack the tools to spur global growth amid deflationary forces.
Share this

All other countries
by Roger Bridges, Global Rates and Currencies Strategist
28 August, 2015

Recent moves may be exaggerated by the lack of liquidity as a result of northern summer holidays but the results have seen major technical damage to equity markets, as major long-term trend lines have been broken. The question is not whether the market can bounce from here, and whether it would be a surprise if it couldn’t, but is it the beginning of a trend change, as rallies are simply met by sellers?

To be honest, the US market has been losing momentum for some time, as US companies’ profits have been buffeted by a strong US dollar (USD) and the outlook for the US Federal Reserve (Fed) to start hiking rates. However, concerns about what raising US rates may mean for emerging markets (EMs) and worsening concerns for the Chinese economy have added to the increasing woes of investors. The changing foreign exchange (FX) arrangements for the Chinese Yuan and a spate of devaluations by the Vietminese Dong and the Kazakh Tenge have all proved to be a bridge too far for risk assets.

The major concern for investors is that central banks around the world have literally thrown everything in their tool kits, and more, at their economies and the results have been disappointing. This has seen central banks engage in financial repression with the destruction of interest income which then relied on equity appreciation. If this is missing, the rationalisation of financial repression is missing and the central banks are deemed to have nothing left in their tool kits. Given China was a major factor in the recovery in 2010 and for growth at the turn of the century, the sensitivity of Chinese economic data is understandable, and means that risk markets will remain on the defensive, as the Chinese economy goes though its adjustment.

One of the major trends in the past couple of years has been the rise in the USD, especially relative to the Yen and Euro as the central Banks of Japan and Europe ramp up the unconventional tools of quantitative easing by sovereign bond buying. Apart from helping to ramp-up equity markets by the portfolio balance mechanism, it also helps growth, by devaluing their currencies. Not only did this impact the US economy but also countries whose currency is tied to the USD, like the Chinese. The change in FX arrangements by the People’s Bank of China (PBOC) was to allow them to stop the rise in their nominal effective exchange rate if the USD rose even stronger as the US Federal Reserve increased rates.

Interestingly the past week we have seen the USD fall against the Euro and the Yen, especially as long USD short Euro was a very crowded trade. With extreme turbulence in equity markets the USD fell as either traders reduced risk or they stated to see the Federal Reserve not putting up rates meaning the USD was not likely to go up. 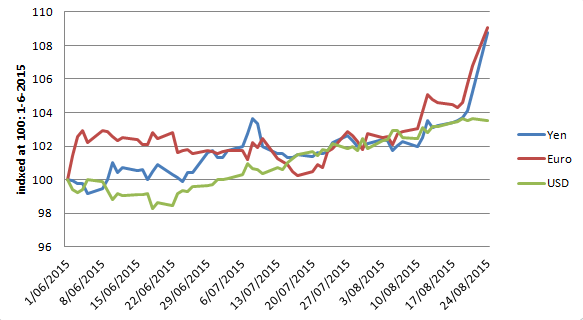 NikkoAM’s expectation was for the Federal Reserve to increase rates for the first time in nine years in September. Although with the changing world environment this hike may be delayed due to the present volatility. However, the Federal Reserve does want to be off zero rates and the question must be asked when is the right time to raise rates? The situation across the world does mean massive rate hikes in 2016 are not likely and should help keep bond markets well supported.

The fact that the Euro and Yen have started appreciating against the USD, and therefore putting up their nominal effective exchange rate, does greatly reduce the effectiveness of their present quantitative easing (QE) arrangements. If this continues we are likely to see these arrangements lasting longer than we may have expected.

It is expected we should see further easing of monetary policy in China by requirement reserve ratio (RRR) cuts, a fiscal response to the present weakness in data, and maybe even devaluation in the Yuan after Xi JiPing’s visit to the US in September. It remains to be seen will these be successful. We are not expecting the worst case scenario of a hard landing, but China will be a source of uncertainty and risk to markets. Unfortunately the fact the Yuan will remain steady or lower than it was means that China will become a greater source of deflation to the developed world than it already was.