Iron Ore: Supply has arrived but where is the demand?

What lies ahead for iron ore prices, particularly with the Chinese economy slowing and undergoing a transition away from a materials-intensive economy to a consumption-driven economy?
Share this

All other countries
by James Eginton, Research Analyst
23 July, 2015

Excess supply, following an unprecedented level of investment, has been the primary driver of iron ore price weakness over the past 12 months. Weak demand is now also playing a part. What lies ahead for iron ore prices, particularly with the Chinese economy slowing and undergoing a transition away from a materials-intensive economy to a consumption-driven economy?

The prices of bulk commodities, including iron ore and steel are weakening due to a supply-demand imbalance. In particular, they are underperforming relative to already weak expectations. Rather than being a solely supply-related issue, as we have commented on in the past, it appears the slowing in growth in China and fixed asset investment (a key driver of demand for bulk commodities) has seen all bulk commodity prices fall to their lowest level since the global financial crisis in 2009.

The modest rally in the benchmark 62% iron ore fines price from USD 45 per tonne to above USD 60 per tonne appears to have been short-lived. The rally was a function of seasonally stronger steel demand, unusually wet weather in Western Australia and Brazil, and supply-side issues from Rio Tinto which was impacted more than most iron ore miners as it ramps up its new infrastructure to 360 million tonnes per annum (mtpa). The result saw China port inventories begin to normalise from highs (see figure 1), with a drawdown of stocks to mills of approximately 30 million tonnes. The surprisingly weak Australian supply thus looks to be the reason for the strength in prices from April to the end of June.

The currently depressed steel prices and new supply emerging in the iron ore seaborne market in the third quarter of 2015 are likely to weigh on iron ore prices for the rest of the year. Figure 2 highlights the deterioration in steel price spreads for the key construction steel, rebar. Steel prices have fallen to 2002 levels and utilisation levels at steel mills globally sit in the low 70% range, suggesting mill profitability in China, and the rest of the world, is very poor. This environment is not conducive to bulk commodity price rallies. As a result, coking coal prices have also been very weak in recent months, with a key Japanese quarterly coking coal contract for high-quality hard coking coal settled at USD 93 per tonne, down from USD 110 per tonne the previous quarter.

The medium-term outlook will be driven by a recovery in steel spreads and a return of mill profitability. In order to achieve this outcome, steel mill utilisation needs to recover to above 80%. There are two ways to achieve this. The first is to close capacity. Due to the impact on employment and the local government, it is unlikely the Chinese government will allow mills to close en masse, but this is the longer-term goal of the central government. Managing the transition away from being a manufacturing-based economy is a slow and difficult process, so is not expected to occur in the next few years. The closure of steel mills will also be a key signal that the Chinese economy has transitioned to a less material-intensive services economy (although this signal is typically a later transition signal).

The other option is a demand-led recovery. This will require targeted stimulus to material-intensive industries. This may include stimulus for infrastructure or property construction. At this stage, it is not apparent that China will announce any stimulus measures. However, there has been recent speculation about the ‘One Belt, One Road’ (OBOR) project (see figure 3), which is essentially the construction of infrastructure to support exports to regional neighbours. It includes the construction of ports, rail and road infrastructure in order to service China's nearest neighbours in Europe and Asia as well as to the world. The difficulty with such a long-term strategy is how trading partners will respond to the flood of cheap Chinese bulk materials into their market and potentially causing harm to employment given they are significant employers. It will be interesting to see how the Western world responds. To date, trade cases to help prevent the dumping of material have been launched by the European Union and the United States in particular. Trade protection against China is likely to grow.

Figure 3: The ‘One Belt, One Road’ project 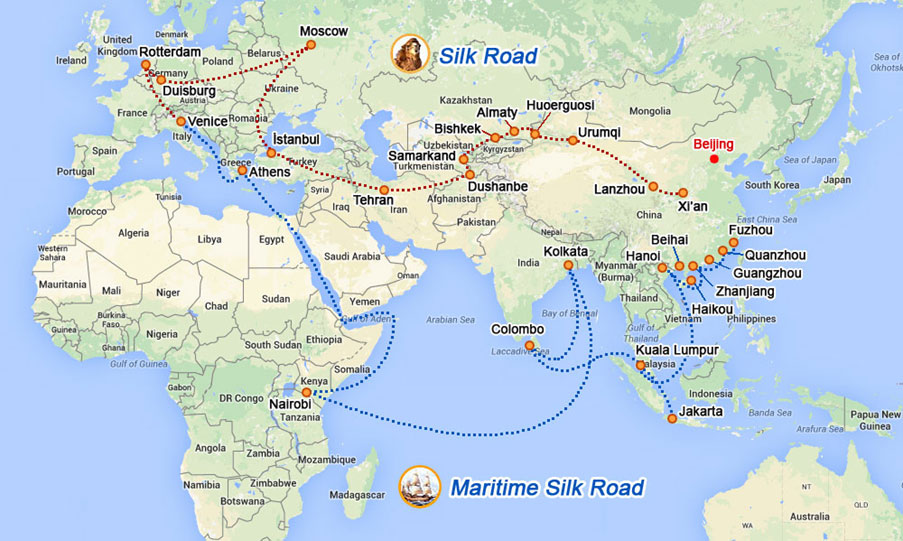 The iron ore and steel markets are currently suffering from weaker-than-expected global demand, exacerbated by the slowdown in China. At the same time, due to the past high prices and the implementation of a number of new projects, the supply has grown. Looking forward, the outlook for iron ore and steel prices is heavily reliant on the strength of Chinese demand. Supply continues to grow and will likely peak within the next two years. This may put further pressure on prices. Nikko Asset Management Australia has maintained a cautious approach to this sector in the Australian equity portfolios for some time, and we continue to do so as we believe iron ore prices will remain weak for some time.

James is an analyst for the Mining & Mining Services, On-line Retail and Building Materials sectors.

James assists with quant modelling and production of month-end risk reports for the Australian equity funds in addition to research responsibilities.