Bond market sell-off may look like 2003, but it shouldn’t be as bad for US Treasuries

Although the recent bond market sell-off may remind the market of 2003, we don’t believe US bonds will be as badly affected. By comparing the worst US bond sell-offs since 2003, we estimate that the 10-year US Treasury yield could hit a high of 2.8-3.2% by October
Share this

All other countries
by Roger Bridges, Global Rates and Currencies Strategist
29 June, 2015

Lately, it has been de rigueur in the financial press to compare the June 2003 rise in 10-year Japanese government bond (JGB) yields to the sell-off of 10-year German Bunds that started in May. In 2003, as JGB yields steadily fell, global bonds followed. After hitting a record low in June 2003, JGB yields began selling off, driving up US 10-year Treasury yields. We are currently seeing a similar pattern, with the sell-off in German Bunds affecting US Treasuries.

However, in our view, US bonds won’t be as badly affected as in 2003 since their spread to German Bunds had already started to widen a few months prior to the Bund sell-off, whereas in 2003 the US spread to JGBs was extremely tight. By comparing the worst US bond sell-offs since 2003, we estimate that the 10-year US Treasury yield could hit a high of 2.8-3.2% by October this year

As chart 1 shows, the current US bond selloff has been relatively mild so far compared with 2003 and much slower.

Chart 1: Current 10-year US Treasury sell off compared with 2003: Change in yield over number of days from the bottom in US yields 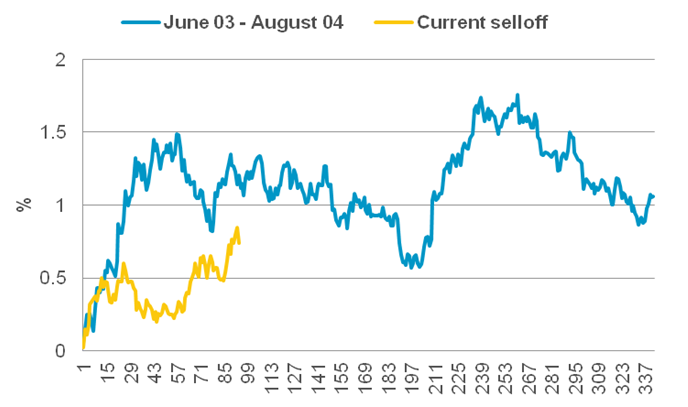 The 2003 sell-off was swift and vicious, with a rise in US 10-year yields of almost 150 bps over just two months. The US spread to JGBs was extremely tight in June 2003 and as the sell-off developed, US spreads to JGBs widened by nearly 100 bps so US Treasuries were hurt not only by rising JGB yields, but also by the spread widening.

However, in the current situation, the rally in Bunds during 2014 and 2015 saw the spread between Treasuries and Bunds widen, rather than narrow as Treasury and JGB yields did in the first half of 2003 before the sell-off. The spread between US Treasuries and German Bunds started to increase quite sharply in February 2015, so by the time Bund yields began to sell off in May, it had less of an impact on US yields (see chart 2). They had already been gradually rising on expectations that the US Federal Reserve (Fed) would be raising rates later in the year. Whereas in the 2003 scenario, the market was not expecting imminent rate rises – in fact, the Fed funds rate remained at 1.0% until June 2004. 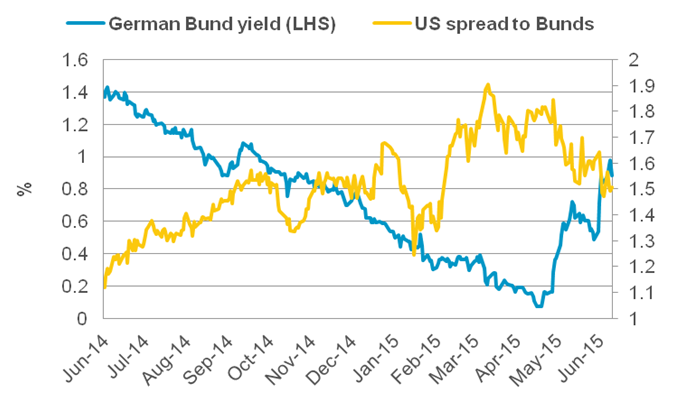 Chart 3: Yield changes for US 10-year Treasury sell-offs since 2003 over first year 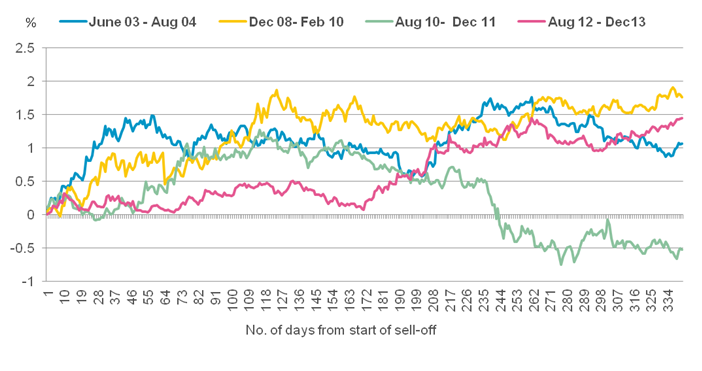 As we can see, 2003 was the steepest initial sell-off, with the US 10-year yield jumping over 150 bps within a couple of months. The August 2012 sell-off was the slowest to gain momentum but accelerated after then-Fed Chairman Ben Bernanke’s speech on tapering QE3, peaking just short of 150 bps. The 2008 sell-off was the worst, peaking at just below 200 bps, but the 2010 sell-off quickly flickered out.

Chart 4: Comparing the average of the worst US 10-year Treasury sell-offs to the current one: Change in yield over number of days from bottom in yield 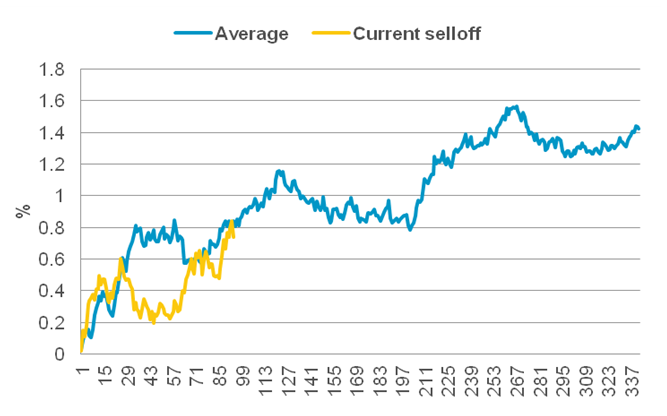 The 2003 sell-off was initially more vicious than the current one. June 2003 saw both US Treasury and JGB yields start rising together and before the sell-off started, the US spread to JGBs was at extremely low levels. This year, the low in US Treasury yields occurred in January, while the Bund sell-off did not start until May so US Treasuries were less affected by Bund moves. By comparing the worst US bond sell-offs since 2003, we estimate that the 10-year US Treasury yield could hit a high of 2.8-3.2% by October this year. If the Fed raises interest rates before the market expects, or its communications suggest that rate rises will happen faster than anticipated, we could see US yields push higher than those estimates, but we view this as unlikely.