We expect that Japanese pension funds will continue to shift their investments into risky assets in 2015.
Share this

All other countries
by Naoki Kamiyama, Chief Strategist
07 May, 2015

We expect that Japanese pension funds will continue to shift their investments into risky assets in 2015; largely these outflows from Japan are going into global equity and bond markets. 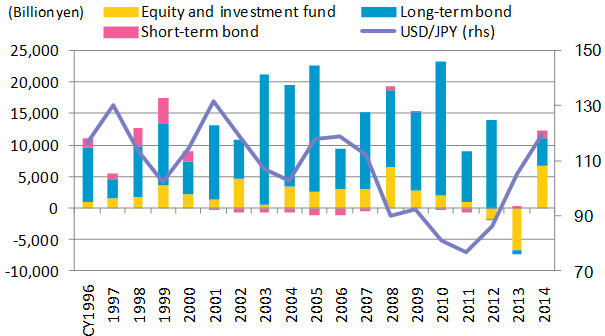 The Ministry of Finance’s figures for Japan’s balance of payments and portfolio investment assets/liabilities show that long-term foreign investment flows significantly changed in CY2014. After selling large amounts of foreign assets in 2013, as the depreciation of the Yen led to large profits on accumulated foreign investments, Japanese investors bought large quantities of foreign assets in 2014. Another key difference in 2014 was Abenomics and its encouragement of risk taking which led to overseas equity purchases hitting a record high.

Before Abenomics, Japanese investors were primarily “yield hunters,” that bought US bonds with relatively high coupons funded with low cost JPY liabilities; many Japanese investors thought that Japanese interest rates would remain low in Japan due to persistently low inflation. The JPY had remained stable long enough (though at a high level of around 80) to keep this “yield hunting” profitable, but their risk appetite was not strong enough to increase their overseas equity investments even after panic from the Lehman shock had waned. Although Japanese equities were strong in 2013, Japanese institutions were net sellers as their fundamental assumption that low inflation would continue remained unchanged.

Japanese investors did not begin significantly rebalancing portfolios until late 2014, long after the 2% inflation target policy had been announced by the BoJ in April 2013. A critical tenet of this policy’s ability to generate inflation is the rebalancing of Japanese portfolios. As investors begin to develop an expectation of inflation, it was expected that they would begin selling domestic bonds and buying equities, real estate and foreign assets. Yet in 2013 they sold foreign assets, including overseas equities and it wasn’t until late in 2014 that Japanese investors finally started portfolio rebalancing to protect themselves in anticipation of rising domestic bond yields.

The portfolio rebalancing in 2014 is clearly different in its risk appetite from the earlier “yield hunting” era. In 2014, Japanese investors were large buyers of overseas equities whereas in 2013 they were net sellers of overseas assets as the yen depreciated (as shown in Figure 2). We believe this is a clear change reflecting an attitude of increased risk taking by Japanese investors. 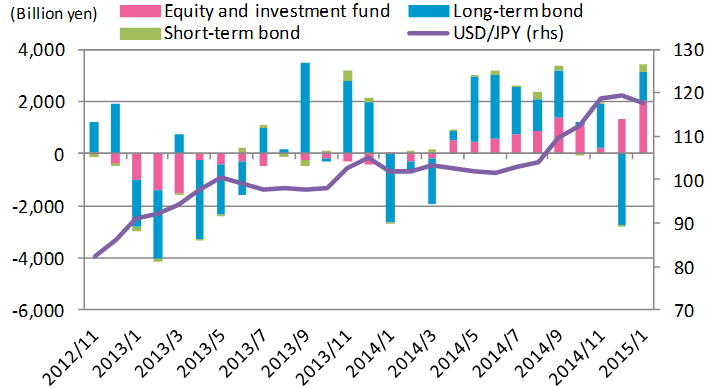 In the “yield hunting” era, the most aggressive buyers of overseas assets were life insurance companies and banks, but recently, pensions have started to purchase overseas assets for their own portfolio re-allocation. Most notably, the GPIF (Government Pension Investment Fund) decided to increase its overseas equity allocation for its JPY137 trillion yen in assets from 12% to 25%. After the announcement, other large public pension funds followed, such as the Pension Fund Association for Local Government Officials (JPY18.9 trillion), the Federation of National Public Service Personnel Mutual Aid Associations (JPY7.6 trillion), and the Promotion and Mutual Aid Corporation for Private Schools of Japan (JPY3.8 trillion). 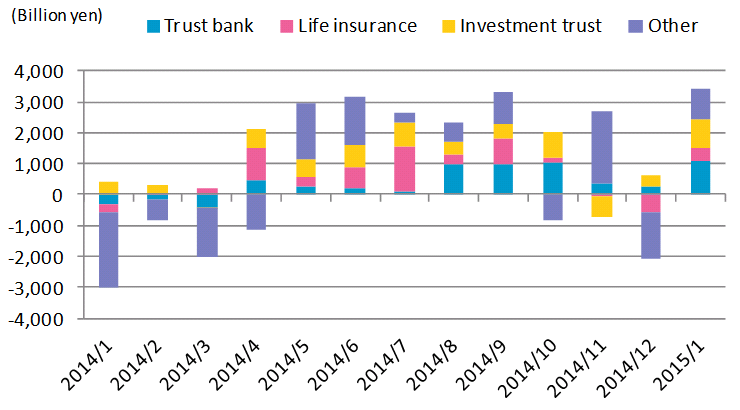 As you can see in the above chart, trust banks, the custodians of the public pensions, were buying overseas assets such as global equities in the 3rd and 4th quarters of 2014.

We expect these trends will continue in 2015. The GPIF has a potential purchasing power of JPY 3 trillion for overseas equities in 2015, the same as in 2014. It is our view that other public pensions (and mutual aid funds) will increase their exposure to risky assets, just as the GPIF has done. The recent reforms will very likely encourage Yucho (the Japan Post Bank) and Kanpo (the Japan Post Insurance Company) to become larger buyers of overseas equities. The total estimated purchases of overseas equities by the major institutions above should exceed JPY4.8 trillion (USD 400 billion). A similar trend is anticipated for overseas bonds; we anticipate JPY15.7 trillion yen of bond purchases from Japan, including JPY10 trillion by life insurers. At the same time, we anticipate JPY4.6 trillion of Japanese equity purchases by these major institutions. We expect the rate of growth by these specific institutions to plateau in 2015, as they achieve their optimal portfolio allocation.

The overall trend of outflows from Japan is likely to continue for several years, as the JPY will likely stabilize and as Japanese financial institutions adapt to a new environment where domestic interest rates begin rising. We don’t expect this trend toward a greater risk appetite to reverse. In 2014 there were JPY12 trillion of overseas purchases in total (JPY6.7 trillion was in equity). We would not be surprised if the number increases in 2015 to the JPY15 trillion (+23%) level achieved in 2009, and to JPY20 trillion in 2016. JPY6.7 trillion of equity investments in 2014 was a record high, but we expect this to continue under the process of normalization following the Lehman shock; equity investments are likely to reach JPY8.2 trillion, also a 23% increase. If the JPY reaches JPY/USD125 by the end of 2015, overseas bond investments should accelerate in 2016 by JPY10 trillion with a similar amount of equity investments (JPY20 trillion in total). In 2017, it is possible for the total amount of outflow from Japan to reach JPY23 trillion, achieving the record-level of 2010. In 2013, overseas equities were largely US equity purchases, but in 2014 it’s mostly flowing into Asia. Before interest rates are normalized in the US, risk-taking capital will likely flow into riskier regions such as Asian equities, as a bet on a global economic re-acceleration.

The implication of the above shift in the risk appetite of large Japanese investors is not only about money flows, but it’s also a very good sign of future inflation that’s being driven by BoJ policies. Governor Kuroda testified in the Upper House two years ago that portfolio rebalancing is a critical component of generating a healthy degree of inflation. Japanese investors have now just shifted their portfolios in expectation of near-term inflation, as they look to protect their assets from the potential of higher interest rates in Japan. As this expectation takes root, inflation is much more likely to develop in line with the policy of inflation targeting.