Our View on the Crucial Chinese Property Market

Given the significant proportion of real estate investment as a percentage of GDP, as well as the proportion of local government revenue generated from land sales, the property market remains a crucial driver of the Chinese economy.
Share this

All other countries
by Eric Khaw, Lead Portfolio Manager
07 April, 2015

Given the significant proportion of real estate investment as a percentage of GDP, as well as the proportion of local government revenue generated from land sales, the property market remains a crucial driver of the Chinese economy.

As widely discussed in western media, there is a structural oversupply in the Chinese residential sector. As a result, the huge oversupply at the moment is forcing developers to focus on destocking and hence there is a deceleration in floor space housing starts growth.

The glut is, however, concentrated in lower tiered cities. 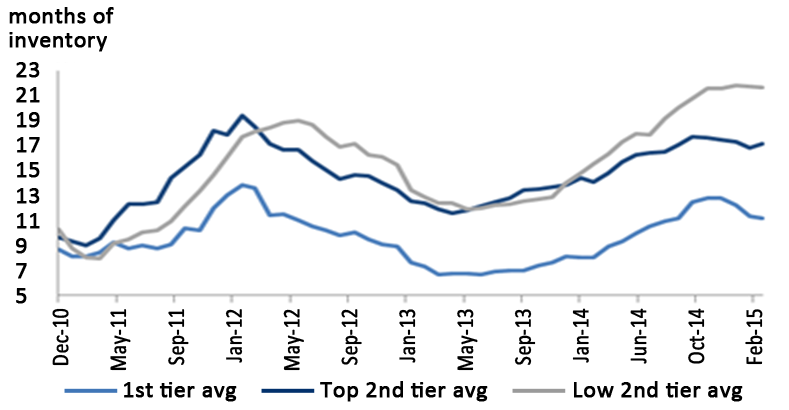 Affordability is also very stretched for some cities. The data in tier 1 cities, however, is amplified by the extremely wide income gap.

Affordability of housing by city (Nov 2014) 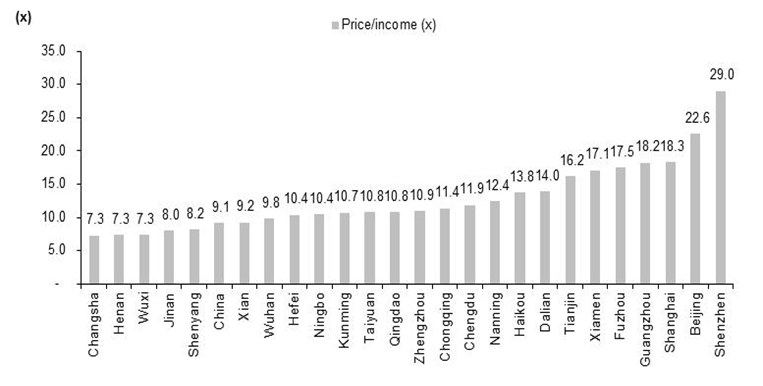 The property sector in China is highly fragmented. As at end-2013, there were 91,444 real-estate enterprises. But, the pace of growth moderated during the last two years, with a mere 2% growth in 2014, and looks set to decline materially in the next five years.

Cities will likely become increasingly polarized in the longer term. On one hand, top tiered cities will likely become increasingly supply constrained and land prices should continue to trend upward in the next three years. On the other end of the spectrum, the lower tiered cities should continue to stagger under the weight of abundant land supply. Land prices will likely remain cheap and house prices should at best stay flat. Given that tier 3 cities account for close to 60% of area under construction nationally, real estate investments should be materially affected if tier 3 cities remain structurally weak.

All these point to a drag on new housing starts and an overall weaker contribution to GDP. New starts growth this year would do well to remain flat but most likely will end up in negative territories. Any material rebound in new housing starts growth numbers would suggest that “the can is being kicked down the road” as additional excess supply is constructed in lower tiered cities.

Conclusion on the near term outlook

Since November last year, the PBOC has lowered benchmark lending rates by 65bps. The first PBOC rate cut managed to briefly lift sentiment and sales volume in the housing market in the last two months of 2014, but the efficacy of the latest cut in February on the property market has so far been slightly underwhelming. Despite property sales showing sequential recovery (i.e. week-on-week rebounds) after the Lunar New Year, year-to-date (YTD) sales show a slight year-on-year (YOY) decline versus even the low-base recorded in 2014.

One reason for the tepid sales is be that monetary easing is becoming increasingly ineffective due to the acceleration of money outflows through various conduits. Liquidity in the system is far from loose and mortgage interest rates have not fallen quick enough. Mortgage interest rates are typically offered at a discount off PBOC benchmark rates, with the historical average discount being 12%. In past loosening periods like 2008 and 2011, mortgage discounts were much higher; however, at the moment, with the exception of Tier-1 cities (where the average mortgage discount is now at 5-7%), mortgage interest rates in most Tier-2-4 cities are still at par to PBOC benchmark rates. Hence, YTD sales in Tier-1 cities were up 36% YoY, while they were -5% YoY and -4% YoY in Tier-2 cities and Tier-3 cities, respectively. If weak sales persist, then we can expect the monetary easing cycle to accelerate in the coming months until market sentiment turns positive, as supported by Premier Li's recent speeches at the National People's Congress.

Offshore credit markets should remain lacklustre as a result of the recent default of a major listed company. While select state-owned companies or quality names should retain their access to offshore credit markets, smaller companies will find spreads expanding. Onshore credit markets, on the other hand, should improve. The opening of the “medium termed note” market for large domestic developers is a new funding channel with lower cost and longer tenure than construction loans. Finally, with conditions favouring larger developers, industry consolidation will likely accelerate from here.

While listed property developers will continue to gain market share, margin pressure is expected to last into 2015 as high inventory levels coupled with high interests burden suggest that margins have yet to bottom. With the exception of a handful of developers that can be expected to buck the trend, most developers will be focusing on deleveraging and destocking in the coming 1-2 years, both of which points to a more modest earnings growth outlook. Equity valuations, however, are undemanding at the moment and can be expected to find further support as the easing cycle progresses.

Eric is the portfolio manager of the Asian REIT fund as well as other Real Estate portfolios at Nikko AM. He started his career in Henderson Global Investors in 2009 as an analyst where he was a part of the Asia Pacific property equities team which managed over USD1 billion of assets in Asia-Pacific property equities. He was subsequently appointed as a Senior Analyst in 2011 and promoted to Associate Fund Manager, assisting in the managing of the Henderson Horizon Asia Pacific Property Equities Fund in 2012. Eric graduated with a BA in Economics and Operations Research from Columbia University.