The recovery in profits by Japanese export firms should continue to attract the attention of the markets in the first half of 2015.
Share this

All other countries
by Naoki Kamiyama, Chief Strategist
23 March, 2015

We are now seeing stronger signs of a recovery in Japanese exports. Despite the lingering weak yen, a secondary effect of Abenomics, growth in real exports has been weak. Basically, it appears that the amount of Japan's exports increased, but in actual fact, such growth in exports was not strong enough to offset a decrease in the inventories of export firms. That said, real exports, as indicated by the Bank of Japan, have clearly begun to demonstrate a recovery trend. Real exports refers to the value of exports divided by the Export Price Index, and recent price movements closely mirror the surge in the volume of exports due to the fact that the effects of volatility in the yen exchange rate are limited. As shown in the graph, real exports in January rose sharply by 14% year-on-year and marks a hitherto unprecedented recovery. 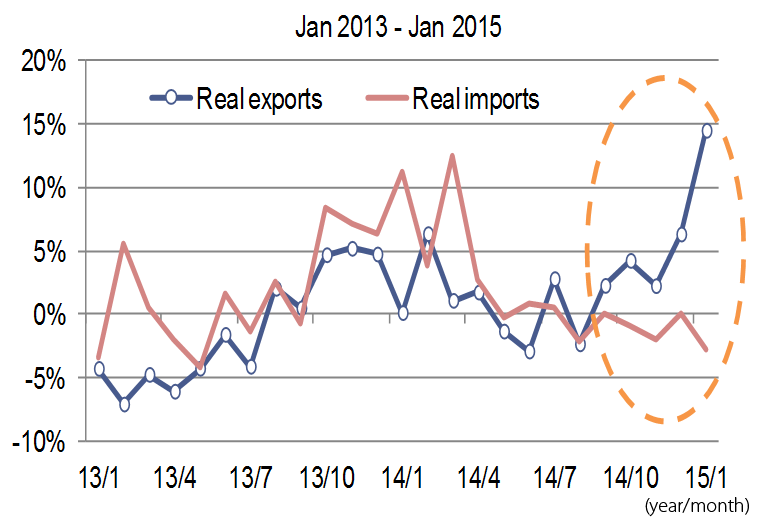 Against the Japanese currency, the US dollar climbed from around the 80-yen level at the end of November 2012 to hit the 100-yen mark by April 2013, before continuing to soar to close to 120 yen by December 2014. On the back of the weak yen, the markets expected to see growth in Japan's volume of exports, but such a resurgence in exports was extremely slow to materialize. Even though a rebound of around 5% year-on-year was seen from late 2013 through to 2014, indications of a recovery in the volume of exports were few and far between, with figures repeatedly falling into negative territory in 2014.

A weak Japanese yen usually means that the prices of export goods of Japanese firms become cheaper than those of rival firms from countries like South Korea and Taiwan and subsequently boost market share and export volume. However, Japan's volume of exports failed to increase because of weak demand in the global economy, despite large-scale quantitative and qualitative monetary easing, the first prong of Abenomics, which suddenly drove down the price of the Japanese currency.

Why export growth is important

Unless Japan's volume of exports increases, the country's regional areas will struggle to benefit from Abenomics. First, let us imagine the mindset of a manager of an export firm. Sales and profits denominated in yen increase on a cheap yen exchange rate even if the unit selling price is the same overseas, but the company's inventory does not decrease. Accordingly, the manager does not think to boost production, and even if profit on paper increases, the firm is not so aggressive as to make changes to its production schedule when exchange rates determine future prospects. Although wages are a matter for the labor market, the manager would probably be reluctant to take the trouble to raise them ahead of time and simply keep production as-is, which means that there would be no increase in employee overtime payments. However, it is expected that the growing volume of exports will lead to totally different changes in the sentiment of managers, whereby bigger profits are not viewed as simply the result of the weak yen. Perhaps a drop in inventory will give managers more confidence to make new investments and ramp up production. Together with the job market improvement in the US, there also appears to be a relationship between signs of a recovery in consumption and the start of Japanese export growth.

We can also see that in many cases, the benefits of heightened sales and profits in export-related sectors during phases of economic expansion in the past tend to spread to domestic demand-driven companies roughly one year later. There are times when domestic demand-oriented firms hike employee wages but suffer a lower profit margin as sales remain flat in order to match increased production and hiring at export firms. Still, employees that benefit from a pay raise or bonus will subsequently spend more and most likely contribute to an increase in sales at firms reliant on domestic demand. In this way, the increase in the volume of exports will prove to be a key marker with respect to the direction of Japan's economy as a whole.

The growth in exports should provide a boost to personal consumption in the manner described above. Excluding the period of last-minute demand prior to and the slump immediately after Japan's consumption tax hike, we can certainly see a strong correlation between exports and private spending. Real exports grew by roughly 9% in the space of two months from November 2014, but it appears that a significant rise in consumption has yet to take place. In other words, we can expect that the effects of the growth in exports will spread to Japan's domestic and regional economies sometime soon.

Created by Nikko Asset Management based on data deemed reliable

In other words, there is concern that Japanese firms, triggered by the weak yen, are lowering their profit margins by casting aside their ability to control prices in order to wage price wars. That said, the fall in export prices is hardly visible in the area of consumer goods such as vehicles, machinery or electric appliances. Despite a notable decline in local currency prices for materials-related products, it coincides with a period of plummeting crude oil prices, so there is probably no need to view this trend as a drop-off in general demand.

The recovery in profits by Japanese export firms should continue to attract the attention of the markets in the first half of 2015. We can expect that employment in the US will improve to the extent that the job market should finally rid itself of slack (meaning that wage levels will not increase until those seeking employment enter the job market). The recovery in US consumption should also drive up sales at export firms in Europe, Japan and Asia. In this way, assuming that the rejuvenation of the global economy becomes much clearer in the second half of 2015, the Japanese stock market will begin to factor in a vanquishing of deflation for the Japanese economy. Accordingly, it is likely that a shift in market focus will take place, from export-oriented firms to domestic demand-driven companies, such as those in the finance sector.

Breaking free of deflation will be a crucially important turning point for the Japanese economy. In similar fashion to export firms in a strong yen environment, managers of domestic demand-oriented firms under a deflationary environment would not have been confident about expanding their business operations. It probably takes 12 months to purchase raw materials, turn them into partly finished goods and keep them in stock. Supposing that a decline in value of 1% is predicted during this time, it is probably not worth the risk of production. On top of this, debts do not diminish during times of deflation. Even negative inter-bank interest rates are not reflected in actual loans. In contrast, if we suppose that prices rise by 1% every year, managers would probably consider borrowing money to expand their business. Naturally, interest rates will increase, but the drive to expand business should grow healthily. This is what the “normalization” of the Japanese economy really means. As it seems that the markets have not fully factored in this scenario at this point in time, we can expect there to be much more room for upward price movements in Japanese stocks.