There are several credible reasons to expect that QE will boost corporate earnings in Europe, though by not as much as in the US. However the risk of disappointment relative to inflated expectations remains high.
Share this

All other countries
by Tanuj Dutt, Senior Portfolio Manager
24 February, 2015

Chart 1: Quantitative Easing and Earnings in the United States (S&P 500) 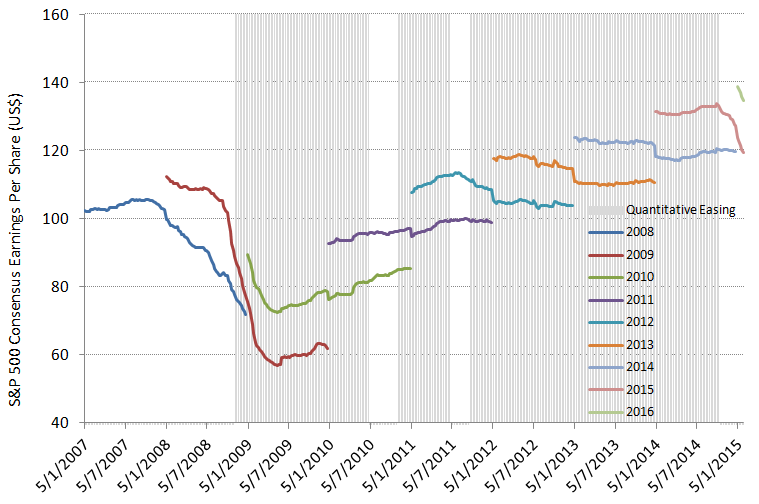 The sharp turnaround in US earnings expectations, and actual earnings, with each round of QE is being looked upon as a precedent for a potential earnings rebound in Europe. Chart 2 puts the expected rebound expected in European earnings in sharp contrast to the serial disappointment of the last several years. Consensus expects earnings to grow 10% in 2015 and 20% in 2016 after having fallen an annualized 7% p.a. since 2007. 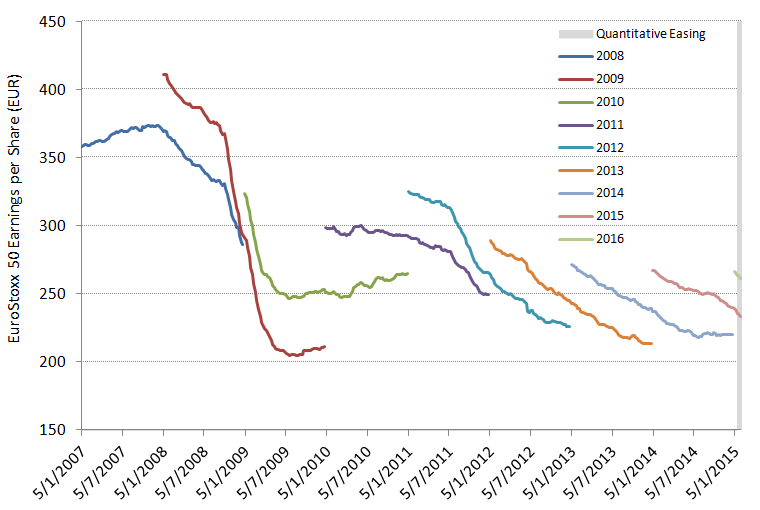 The European QE announcement was much awaited and mostly anticipated. However Mr. Mario Draghi, the President of the ECB, succeeded in exceeding market expectations in terms of the size, scope and pace of the planned asset purchases.

In making asset purchases directly dependent on inflation, and hence designing the program to be open-ended, the ECB has conveyed its commitment to lifting Europe out of the disinflationary malaise that has held back economic growth since the onset of the Global Financial Crisis in 2008.

Inflation, and inflationary expectations, however, will be hard to lift against the strong disinflationary headwinds of slowing global growth, continuing weakness in global trade and falling commodity prices. To this list we can also add the effective global monetary tightening caused by a strengthening US dollar, the end of quantitative easing in the US and a potential lift off in the Federal Funds rate later this year.

In fact as shown in Chart 3, the market pricing of expected inflation in Europe has moved little since the announcement, after a small jump leading into it. 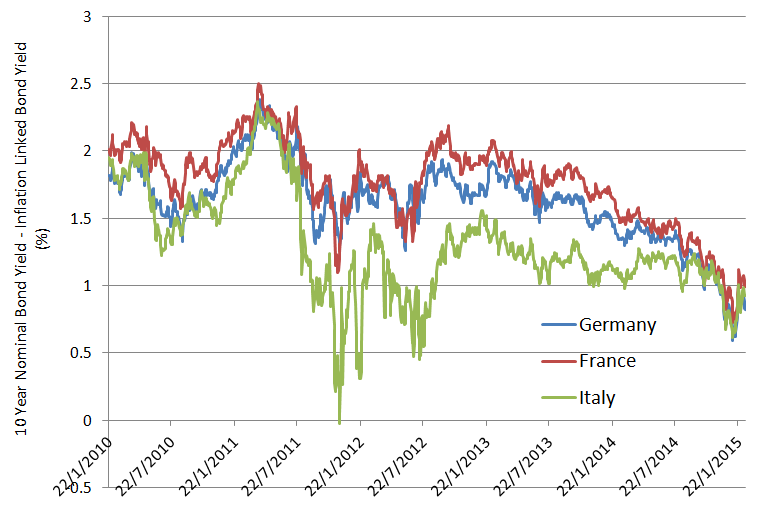 On the other hand, announcement of each round of quantitative easing undertaken by the Federal Reserve was met with sharply higher inflation expectations in the US. This can be seen in Chart 4 where we plot market’s pricing of inflation using 10 year inflation break even rates. The shaded areas highlight the periods over which QE, including Operation Twist, was employed. 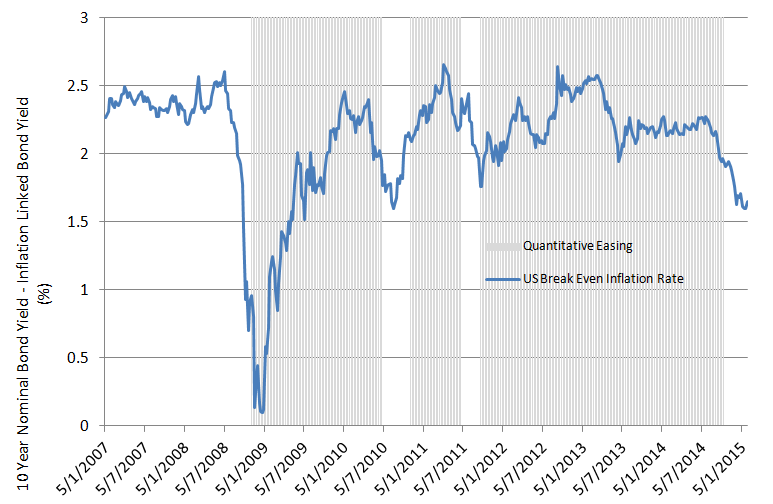 The muted response so far of inflationary expectations in Europe to the QE announcement seems rational from the perspective of the US experience. Each subsequent round of QE in the US lifted inflation expectations there by a correspondingly smaller magnitude. Moreover, inflationary expectations most recently are in free fall in the US, Japan and many emerging markets. It could well be that investors have just become more aware of the limitations of monetary policy to lift inflation (a.k.a. pushing on a string) and a key reason why the effect of QE on inflation expectations in Europe could be very different from the outcome in the US.

Hence the inflationary expectation channel, which is the most direct target of QE, may ironically be the least effective in providing the expected boost to consumption, growth and corporate earnings.

While the jury remains out on the ability of the ECB to manufacture inflation, the FX markets have greeted European QE with great enthusiasm. The Euro has depreciated sharply relative to both the US dollar and the Japanese Yen and on a trade weighted basis. 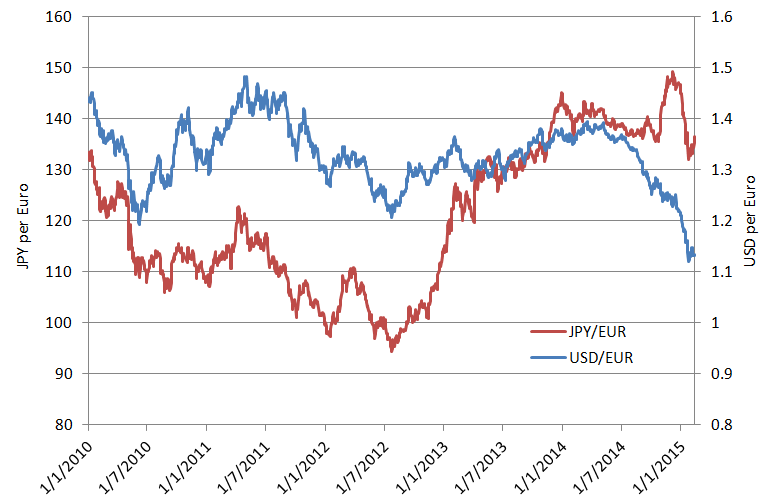 A weaker euro makes European exports more competitive globally and hence should be a positive impulse to both export growth and corporate earnings. In the figure below we show the correlation historically of European equities as a whole, and at the sector level, with the EUR/USD exchange rate based on the last 15 years of data. In general, corporate earnings have been positively correlated with a stronger, not weaker, currency. This is driven partly by the fact that European earnings fell most sharply during periods when faith in the common currency was most shaken. However, the boost to earnings in the export oriented Consumer Discretionary sector (which includes German autos) from a weaker currency is still clearly evident. 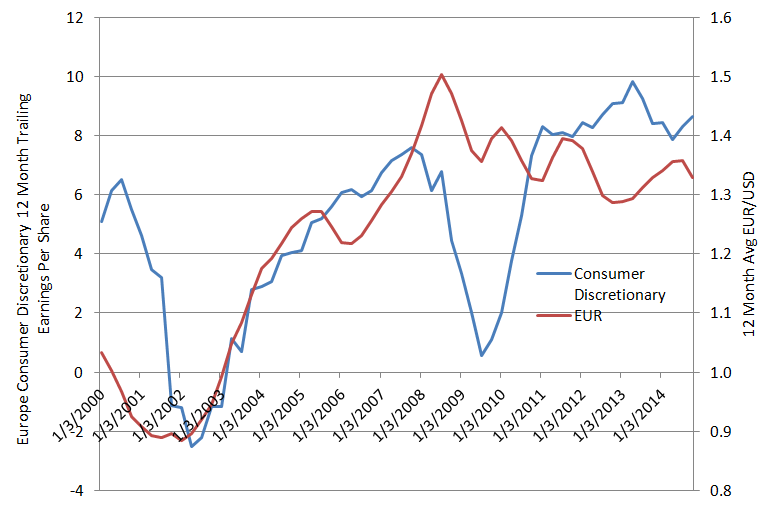 There can be little doubt that a weaker currency is a boon for the already super competitive German automobile and industrial sector. But it is worth remembering that Consumer Discretionary constitutes only around 10% of the overall market. Our correlation analysis at the country level too shows Germany to be a clear beneficiary of a weaker currency, but then again Germany too is only a 15% weight in the broad MSCI Europe index and less than a third of the Euro Stoxx 50 index.

Given the different starting point in the level of competitiveness across Eurozone countries, the exchange rate depreciation needed for supercharging export growth too varies by country. Studies suggest 1 that the German export sector needs only a 1.40 USD/EUR exchange rate to be competitive, while for France it is about 1.2 USD/EUR and for Italy and Spain it may be as low as 1.1 USD/EUR. As such while the depreciation so far may already be a significant additional tailwind for Germany and in smaller measure for France, the gains for Spain and Italy are likely to be less significant than is generally expected unless the currency continues to slide.

On this count we would note that while further weakness in the Euro cannot be ruled out given the aggressive monetary easing by the ECB, it is far from given. The bulk of Euro depreciation may already be behind us if there is an escalation of ‘currency wars’ caused by an ever increasing number of countries around the world pursuing a ‘beggar thy neighbor’ currency devaluation policy.

All in all, there is a better chance of earnings growth coming through a more competitive currency, but the gains overall may be capped and it will be important to pick winners from losers at the country and sector level.

The Financial sector is almost a quarter of European equities by market value. Hence a significant pick up in aggregate European earnings relies heavily on a turnaround in the fortunes of European financials. Under the European QE program, the ECB is buying bonds from European banks at what may be artificially inflated prices and thereby effecting a backdoor recapitalization of the eurozone banking system. To the extent that restoring bank balance sheets would allow them to grow credit it would provide a huge kicker to earnings of the banking sector. This would be similar to the experience in the US where the earnings recovery post-crisis was driven first by Financials before the baton was passed on to other sectors, including Energy and Technology.

Chart 8: US Earnings Growth by Sector 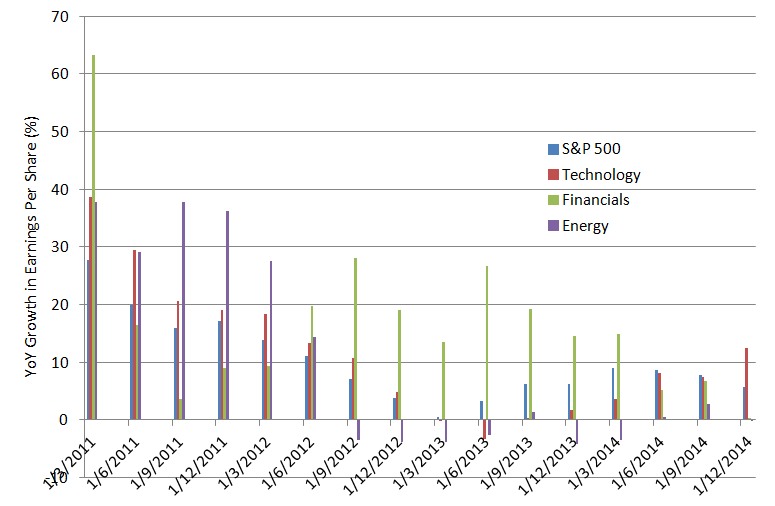 In the case of Europe, there would also be significant second order effects if credit starts to flow more freely through the real economy given the larger role that direct bank lending plays in the supply of credit in the Eurozone. Recent ECB lending surveys confirm continued improvement in lending conditions which could quite reasonably be expected to flow through in terms of increased economic activity, and hence corporate profits. Together with greater top line growth, profit margins in Europe too have room to expand because, unlike the US, European profit margins are neither at historical highs and nor are they exposed to the risk of higher wage inflation from a tight labour market.

As we illustrated in Chart 1, the turnaround in US earnings at the inception of QE was truly remarkable. As discussed above, a key driver for this was the earnings turnaround achieved by the financial sector.

However Chart 8 above also shows the large contribution to earnings that came from Energy. This was where the US corporate sector may have been just plain lucky in the form of the massive boom in shale oil activity that started just about the same time as QE was launched, an experience that won’t be repeated in the case of the current European QE experiment. In fact, we are likely to see just the opposite with several large European Energy and Materials companies facing prospects of sharply lower earnings in 2015 due to the recent large decline in commodity prices.

This places a larger burden on the European financial sector, but with earnings currently less than a quarter of their pre-crisis levels, there is certainly room for growth. See Chart 9. 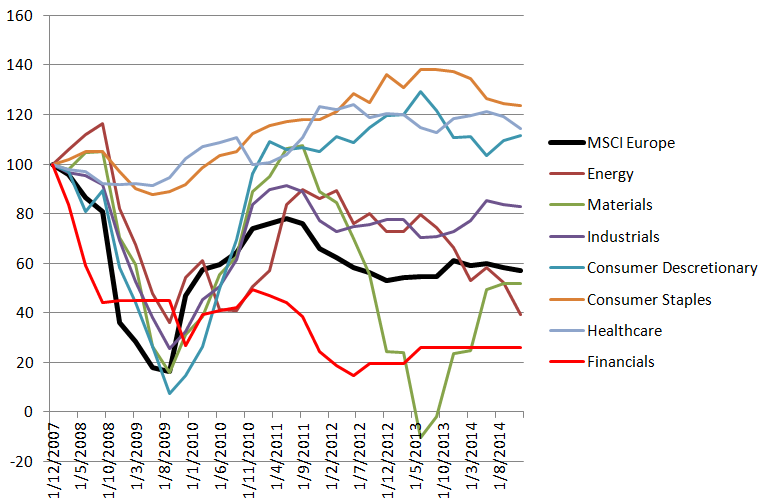 In summary, Chart 10 below showing a decomposition of European equity returns into contributions from earnings growth, multiple expansion and dividend income over the last few years appears to be a good way to conclude this discussion on European QE and earnings expectations. 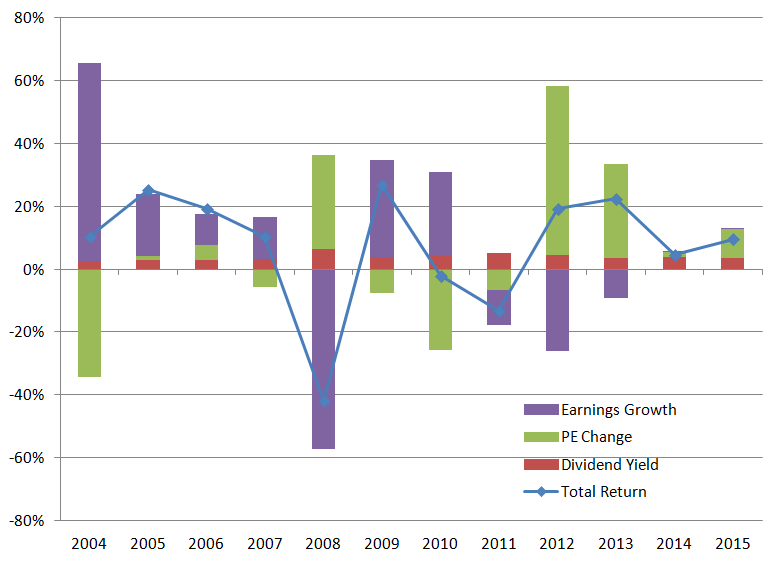 European equities have rallied significantly since Mr. Draghi’s now famous “whatever it takes” speech in July 2012. However, such has completely depended upon multiples expansion, as earnings have so far failed to deliver. This in turn has put increasing pressure on expectations of future earnings growth to justify rising valuations, with consensus forming around sovereign QE as the catalyst to provide that growth. As discussed, there are several credible reasons to expect that QE will boost corporate earnings in Europe, though by not as much as in the US. However the risk of disappointment relative to inflated expectations remains high.

Before joining Nikko in 2014, he was a co-founder and portfolio manager at Nuvest Capital Pte Ltd. in Singapore where he co-managed a global, multi-asset fund with a focus on alternatives. Prior to that he held various quantitative roles at Citadel Investment Group, Optimal Fund Management and Salomon Smith Barney/Citigroup.