What will happen to US Treasuries if Japanese government bond yields go to zero?

In a pre-GFC and pre-QE world, zero or negative interest rates on a German, Japanese or US 10-year bond would have been considered highly implausible. However...
Share this

All other countries
by Roger Bridges, Global Rates and Currencies Strategist
04 February, 2015

In a pre-GFC and pre-QE world, zero or negative interest rates on a German, Japanese or US 10-year bond would have been considered highly implausible. However, as of the end of January 2015, 10-year German Bunds and Japanese government bonds (JGBs) were only around 30 to 35 basis points (bps) above zero. Between the end of June 2014 and end of January 2015, the yield on 10-year JGBs has fallen by around 30 bps, German Bunds by around 90 bps, and US Treasuries by around 80 bps.

10-year yields over past five years 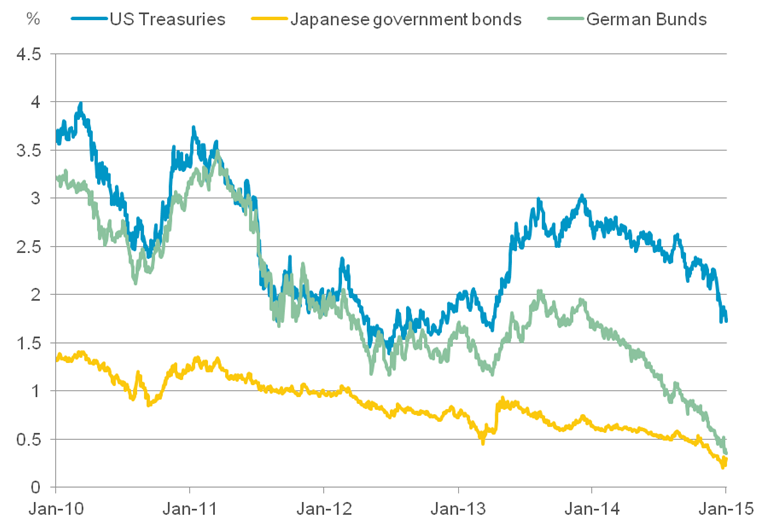 Over the past 10 years, the weekly correlation of US Treasuries to JGB yields has been quite high at nearly 40% and a beta (measure of the volatility or systematic risk arising from exposure to general market movements) of 0.6. If this correlation were to continue at the same level and if the movement in JGB yields is helping to drive US yields lower, then a 30 bp fall in the JGB rate could mean a 17 bp fall in US Treasury yields to just above their record low of 1.42%. It is worth noting, however, that German bunds have been more correlated to US Treasuries historically, averaging 88% over the past 10 years and with an extremely high 95% correlation in 2014. So a fall in German bund yields will likely also exert a downward influence on Treasury yields.

We also looked at the correlation of spreads over the same 10-year period – the beta for the spread between the yield on US Treasuries and the JGB yield was around 1.2, with a correlation of 70%. This means that the spread differential between the two has a much higher correlation than the actual level of yield. This suggests that a 30 bp fall in JGB yields would see the Treasury spread over JGBs falling by 36 bps. So if JGBs were to reach zero, we could reasonably expect US Treasuries to reach record low levels, at least retesting the 1.42% low of 2012, and potentially much lower. Based on historical spread correlations, zero JGB yields could see a 1.10% yield for US Treasuries, much lower than would be expected based on historical yield correlations.

But is this really likely? Currently, the German yield curve is negative out to 5 years so it is not too farfetched to imagine that we might see German bunds reach zero when the European Central Bank (ECB) starts buying sovereign debt. With the Bank of Japan and ECB continuing their quantitative easing programmes, we think zero rates on 10-year JGBs and German bunds could be on the cards, with history suggesting US Treasury yields could fall as a result.