Through 2014, one of the largest asset classes in the world was virtually unnoticed as an indicator that Europe is not pushing the global economy into widespread deflation.
Share this

All other countries
by John Vail, Chief Global Strategist
24 February, 2015

Despite being arguably the world's largest asset market and, thus, a key determinant in whether the world is truly in a deflationary cycle, European real estate (with the exception of that in England) is widely neglected in both macroeconomic research and the global media. Indeed, with deflation headlines dominating the region, many global investors likely assume that property prices are declining throughout the region, with obvious ramifications on the economy and, thus, ECB policy; but is this actually the case? The conclusions in this report will surprise many readers and should significantly influence their global economic and investment outlooks.

Firstly, as for some details, similar to most consumer inflation indices globally, the ECB's Harmonised Indices of Consumer Prices (HICP) does not include home ownership; instead, the basket includes rental prices and dwelling maintenance costs. Although the accuracy of the HICP has come under some criticism, it remains central to the ECB's inflation target mandate and shows that rents have been rising across Europe for many years. Some of the countries showing the greatest increases in rents also saw substantial house price increase within the region, such as Ireland and Estonia (see chart below). Only the most troubled countries, Greece and Cyprus, have experienced significant rent decreases in recent years.

Residential property prices are treated separately and captured in the Eurostat House Price Index (HPI). However, given the size of the sector and its connection to the stability of the wider economy and banking sector, home prices remain critical information for ECB monetary policy and national regulation. Both rental and home-ownership prices are important in Europe, not only for the obvious connection between the two, but because of the diversity of tenure in the European property market. Countries such as Germany and Austria have relatively low levels of home ownership, where renting is popular, compared to Spain and the Baltic markets, for example.

For 2015 there are a host of supportive factors in place for European house prices: aggressively loose monetary policy; positive housing supply and demand dynamics; status as a global safe-haven, and a recovery in property investment. Indeed, there was a strong resurgence in property investment (commercial and residential) in 2014 – up approximately 30% over the long-term average and close to 80% of the 2007 level, as calculated by Savills the global real estate agent, a trend that it expects to continue in the coming years. 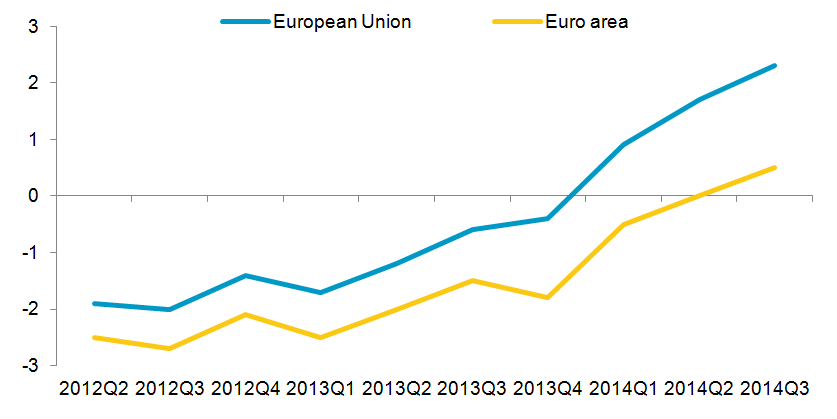 With record low interest rates across Europe, property yields have become increasingly attractive. In 2014, the European Union saw a broad increase in house prices, following previous price declines, with +2.3% y/y growth in the third quarter of 2014. Given that interest rates are expected to remain low for an extended period due to the ECB's new quantitative easing (QE) policy, this critical support for the real estate market remains in place in the near term.

Looking beyond the regional level, the Eurostat HPI shows strong price performances in many major European residential property markets, notably led by Estonia, Ireland and the UK in 2014. Italy and France remain negative, but their trends are greatly improving, while Spain has stabilized after previous large losses despite being a stand-out case of oversupply in Europe. The Netherlands, Denmark and Portugal are all solidly positive and as for Germany, it, disappointingly, has yet to release 2014 data for the second and third quarter, but the trend should remain in a firmly positive direction. Perhaps unsurprisingly, Greek data is not available. 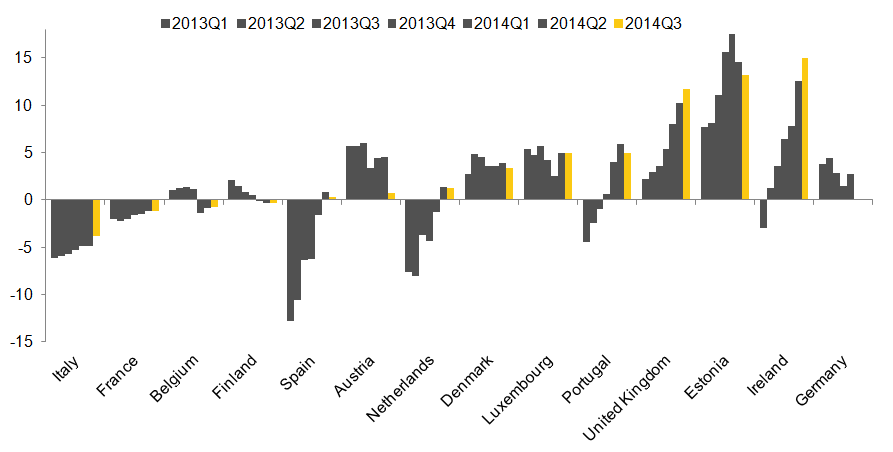 Aside from low interest rates and increased liquidity in European capital markets, underlying demographics continue to support capital growth in many major European cities. Housing supply has failed to match population growth in a number of urban centres over the last decade. London stands out in this regard - with only one new home built per five new residents over the last decade following a well documented and long history of undersupply.

CBRE estimates that historically, the UK is required to deliver approximately 200,000 new homes a year to meet demand, however only about 125,000 new homes per year have been built. The problem is particularly pronounced in London, and shared by other densely populated cities such as Paris, where house building has not kept pace with population growth. The Mayor of London office's research suggests that the undersupply problem is so acute, that having failed to build sufficient new homes for more than thirty years, London will have to build 42,000 new homes per annum for the next twenty years to satisfy current levels of demand alone. Even with a change in regulation to tighten mortgage lending standards, London saw a 15%y/y increase as of November 2014 (compared to 10% y/y nationally), according to the UK national statistics office, outpacing all other UK regions, reflecting the strong pent-up demand.

Paris and large German cities also show low housing availability; however, with Germany's macroeconomic outlook stronger than France's, cities such as Munich are expected to see more price and rental yield support by global property consultancies. In a 2012 EU survey, over 75% of respondents in Munich, Hamburg and Paris found it difficult to find good affordable housing. Large German cities were found to have the greatest levels of dissatisfaction over ease of finding appropriate housing, which the EU attributes to rapid property price increases in urban German areas. Moreover real estate consultancies estimate significant housing shortage in Berlin, Hamburg and Munich. 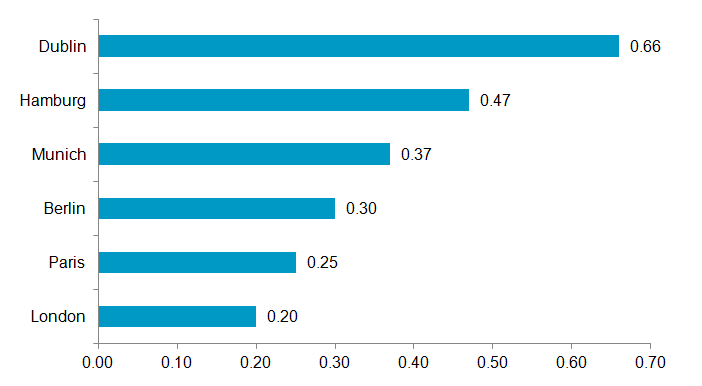 London and the UK stand out with rapid house price growth in 2014 on a global scale, despite coming from a high base. London was ranked by the CBRE Group as the most expensive city by price per square foot of prime residential prices amongst a survey of global cities. However the outlook remains strong for London – the first UK city expected to become a "megacity" with a population of over ten million within the next decade. In a city already battling with an undersupply of housing, the demand for residences remains elevated for years to come.

As more European countries show signs of firmer economic recovery, 2015 will likely see the rise of other nations' residential property prices, coming out of years of structural reform, such as Ireland, Spain and Portugal with improved prospects and attractive valuations enticing buyers and investors. Ireland has already seen substantial price recovery (+15%y/y in 3Q14 according to Eurostat), as has Portugal (+4.9%y/y in 4Q14), whereas Spain is still struggling after years of house price deflation (growing at +0.3%y/y over the same period).

Barcelona and Madrid have emerged as cities with rising interest from foreign investors, mainly in prime residential and commercial property investment, however a positive pricing impact is expected to be lagged for the time being. Importantly, Knight Frank, a global property consultant, forecasts strong prime residential property price growth in 2015 for Dublin and Munich, and moderate growth in Paris and Madrid. However, it expects London prices to remain stable following a period of rapid growth, and expectations of a weak economy in Italy keeps its outlook for Rome subdued.

Although risks remain, largely from Greece and a key election in Spain, the backdrop for European real estate prices and rents remain favourable. QE, in particular, is expected to provide the European property markets a further, and notable, boost. Indeed, Cushman and Wakefield forecast that without QE, property transactions would increase 5-10% in 2015, but with the programme, it expects a considerable 20%+ jump. Additional factors such as lower oil prices are expected to enhance consumer purchasing power, potentially driving up home prices further.

Critically, rising home prices create the "wealth effect." Europe's experience with asset deflation is localized and minor, and, thus, completely unlike Japan's experience of nearly continuous declines over two decades from extremely overvalued levels. Therefore, this wealth effect should make Europe's personal consumption pattern much more positive than Japan's decades of deflationary pessimism. Meanwhile, the rise in housing rent and prices promotes inflationary psychology and counters the view that deflationary forces are dominant in the Eurozone. In sum, one should not suggest that Europe will experience a boom, but neither should one be too pessimistic. Moreover, these facts about Europe clearly have global ramifications. If Europe is not truly in deflation when excluding energy prices, and its prospects are for moderate growth (driven by the wealth effect, lower oil prices and low interest rates) and disinflation going forward, the global economy should perform better than many investors predict.

Through 2014, one of the largest asset classes in the world was virtually unnoticed as an indicator that Europe is not pushing the global economy into widespread deflation. Indeed, European real estate markets are now generally rising, with positive prospects in 2015. Of course there are risks ahead, especially regarding politics, but the ramifications of this fact, namely the realization that Europe is not pushing the world into deflation, but instead back to moderate global economic growth with disinflation, are quite powerful. Barring external shocks, this should soon cause major central banks to be less pessimistic and bond markets to be less bullish. Global risk assets would receive both positive and negative effects from these developments, but their trend should be positively tilted in the intermediate term.