Is Brazil in Crisis?

Brazil can no longer continue as “business as usual” and it is at an important crossroads as to whether it can exit the well-known “middle income country trap.”
Share this

One of the original roaring emerging market success stories, Brazil has taken a disappointing turn: a struggling economy and a year dominated by political uncertainty and civilian unrest. The 7th largest economy in 2013, Brazil is a key global factor, especially in a world of enhanced EM scrutiny under a stronger USD. Our Chief Global Strategist, John Vail, and Global Currency and Fixed Income Analyst, Lisa Wong, debate the outlook.

John: In an environment of a stronger US economy and USD, I wonder, aside from commodities, what is Brazil’s true competitiveness? The economy seems beleaguered with growth near 0% in 2014 coupled with high inflation, and only 1% y/y growth for 2015 expected by market participants. Brazil routinely ranks poorly in global competitiveness surveys, such as the World Bank’s Doing Business Report 2015, where it ranks 120th of 189 countries on account of bureaucratic hurdles, inadequate infrastructure and other factors. Combined with deteriorating current account and fiscal balances, and a more challenging external environment, the situation begs the question of whether Brazil is in crisis. 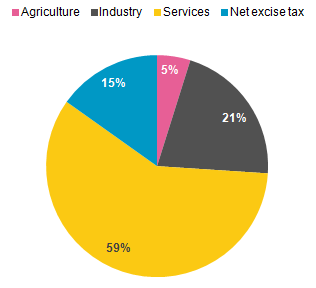 Source: The Brazilian Institute of Geography and Statistics (IBGE)

Lisa: A less favourable global environment has certainly exposed some of Brazil’s structural problems. Taking a step back, it is important to remember that as the largest economy in Latin America, Brazil also participated in the phenomenal growth story of the region which saw the greatest income windfall from any cyclical commodity boom since the 1970s, according to the IMF. During the period, Brazil made rapid development gains, with GNI per capita growing over 200% from 2000 to 2013, leading to the creation of a new middle class, which now comprises of over 100 million people – one of Brazil’s core strengths.

Despite a reputation of being a commodity-rich economy, the services sector has been the most significant contributor to growth; in 2013, approximately 59% of GDP was derived from services. Brazil is actually a relatively closed economy - with exports at only 13% of GDP in 2013 and imports at 15%, as calculated by the World Bank. Instead, Brazil’s strength lies in its vast, relatively sophisticated and diverse domestic markets – ranked 6th largest in the world1.

Service Sector is the main component of Brazil GDP 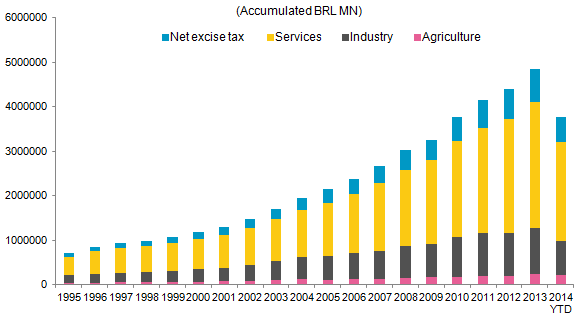 The commodity super cycle has now matured and it is now clear that Brazil underinvested during the good years. For comparison, over the last two decades, Brazil’s levels of investment and national savings on average were 18% and 16% of GDP respectively, compared to 42% and 45% in China. Moreover, as jobs were created and incomes rose, labour costs in Brazil also increased, leading to much lower competitiveness. So, I agree that Brazil seems to have exhausted its current consumption driven growth model fuelled by years of rapid credit expansion, improving labour markets and fiscal expansion, without gains in total factor productivity (TFP) – indeed, the IMF estimates that annual average TFP growth was close to 0% in 2003-2012.

However, because economic disappointment has been consistent, and civilians are increasingly unhappy with declining living standards, reform efforts have gained momentum and I believe this will propel Brazil into an investment-led growth model to reboot the economy. There are also early signs that domestic industry is innovating in response to the difficult environment: senior industry participants note that firms are addressing how to add value to their products rather than shipping raw materials abroad to be processed elsewhere. The transition will be gradual, but the potential for the economy is immense. Longer term reforms in education and labour are also necessary to address Brazil’s skills shortage and enhance labour productivity.

John: But are structural reforms possible? With weak approval ratings, the risk is that Rousseff fails to deliver enough fiscal adjustment to avert negative rating action and instead enacts increasingly populist policies driven by fear of civilian unrest, leading to further fiscal deterioration. Record low unemployment could reverse soon if the economy continues to be weak and labour hoarding becomes too costly for firms, increasing political risk in the near term. Moreover, she may become more inclined to ignore market pressures and align herself with China and Russia, which would lead to more unorthodox economic policies, not less.

Lisa: First, Brazil may experience negative rating action, but it has not deteriorated to a condition worthy of being stripped of investment grade status given the quality of its institutions and domestic markets. Net public debt remains reasonable at 36% of GDP as of October 2014, and Brazil also has a substantial buffer against foreign flow shocks in the form of over 370 BN USD worth of foreign reserves. Even allowing for the volume of currency swaps sold in central bank FX intervention, which corresponds to less than 30% of the reserves, ca. 100 BN USD, the buffer remains relatively high.

As to whether reforms are possible: Rousseff is in a weak political position having been re-elected with the slimmest margin since democracy was re-instated. However, many of her critics support the more orthodox economic perspective of the newly appointed economic team. Brazil’s multi-party democracy, with its divisive ideologies, will make reforms gradual and challenging, but the new economic team shows an important shift in Rousseff’s stance; vital to regain international credibility. The new Finance Minister, Levy, a fiscal hawk, has already announced goals to help Brazil stabilize its debt and the new Planning Minister, Barbosa, will oversee new infrastructure plans. They are both expected to enact some reforms to enhance ease of doing business and unwind government intervention in key industries, such as regulated energy prices. 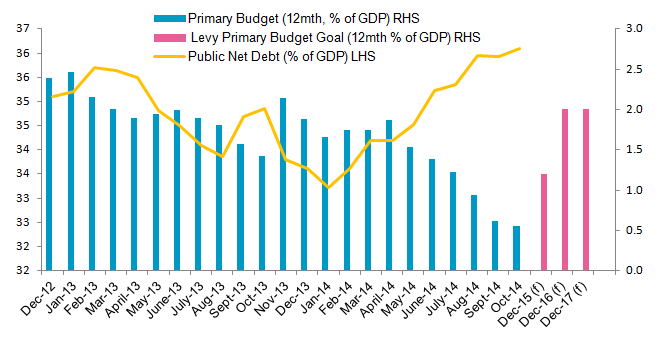 John: Speaking of vulnerability to foreign flows, the CAD is at the highest levels since the early 2000s despite the weak economy, reaching 3.7% of GDP on a 12 month accumulated basis in October 2014 and it could get worse next year, which would make Brazil highly unattractive to global investors. FDI no longer completely covers the CAD, and in past EM crises it has been revealed that FDI flows were not of as high a quality or as stable as many expected. What types of FDI inflows have entered Brazil, and with such uncertainty over commodity prices, how does this affect the FDI outlook? 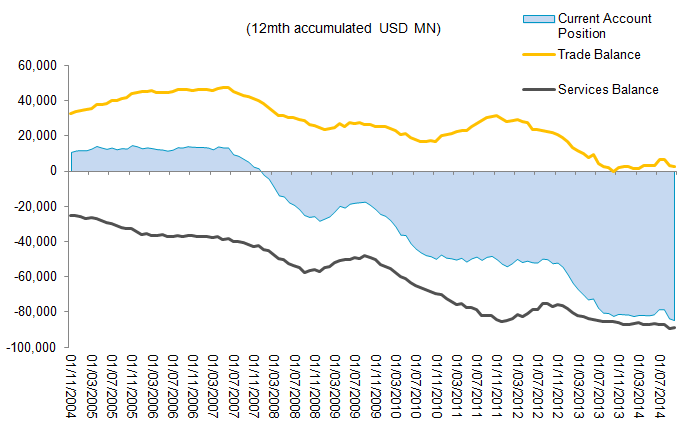 Lisa: FDI inflows have consistently been high since 2010, staying over 60 BN USD annually since 2011, and have mostly been in non-commodity sectors despite Brazil’s reputation as a commodity country. Large international firms in automobiles, consumer goods, telecommunications, amongst many other industries, flocked to Brazil to tap into its substantial and growing new middle class and the trend looks set to continue as many consumer markets remain attractive for upcoming years. 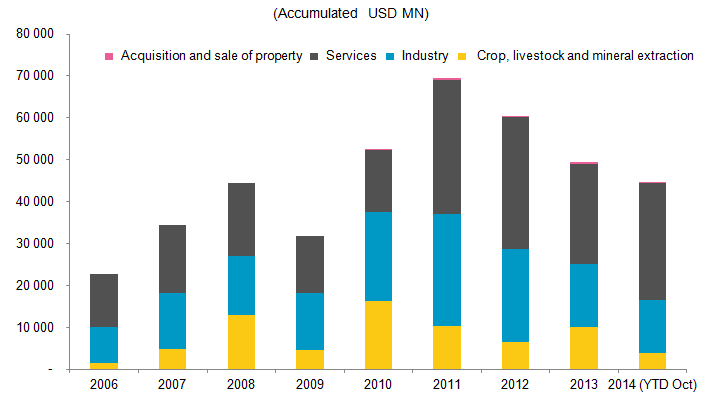 FDI also still largely covers the current account deficit; in October, FDI reached 52 BN USD YTD, representing 2.7% of GDP - or 74% of the current account deficit. With a large infrastructure programme to address the country’s chronic bottlenecks, the FDI outlook remains attractive in the medium-term as the projects are long-standing and require significant investment and expertise that Brazil is struggling to provide alone; the central bank expects a total of 63 BN USD of FDI in 2014 and continued stable flows in the near term. Large international firms see Brazil’s large middle class as a significant business opportunity; according to the trade and investment agency, Apex Brazil, 490 of the Fortune 500 companies operate in Brazil. Recent large airport auctions, which attracted investors from Singapore, Munich and Zurich, showed the strong international interest in unlocking Brazil’s considerable economic potential.

John: By the sounds of it, Brazil can no longer continue as “business as usual” and it is at an important crossroads as to whether it can exit the well-known “middle income country trap.” Domestic issues aside, EMs will continue to encounter major headwinds as an asset class in early 2015 due to negative stories from large countries, such as Brazil and Russia. Even with potentially improving conditions and outlooks in China, Japan and Europe (following further stimulus), and commodity prices in 2015, Brazil could still be vulnerable if it fails to convince markets that it can enact the much needed change to put the country back on a more sustainable growth path. Further complications and risk of default in Venezuela could lead to EM contagion and sell-off, particularly in Latin America.

Lisa: EMs have been severely hit during the 4Q14, particularly commodity exporters, and Brazil is no exception. However, Brazil is, indeed, at a crossroads. An infrastructure-investment led approach, coupled with more economic orthodoxy to attract international investment to finance the plan, will not only help Brazil avert crisis – but actually thrive. In such a scenario, Brazil, already one of the highest yielding investment grade emerging market countries, would stand out among EMs as a country with mature financial markets undertaking a radical shift for the better. This, in our view, would be positively reflected in its asset prices in hopefully a less chaotic global investment environment in 2015.

Lisa Wong is a Global Currency and Fixed Income Analyst at Nikko Asset Management, based in London. She has an additional focus on sustainable investments.

Prior to joining Nikko AM in 2012, Lisa was at Citigroup in the industry specialist Microfinance group, working with emerging market financial institutions. Lisa holds a MA (Cantab) from the University of Cambridge and a dual-degree Master of Public Administration (MPA) joint awarded by the London School of Economics and Columbia University, specialising in politics and economics.