Rate cuts down under?

If the RBA does cut interest rates, it is likely that they will make more than one cut, so we could see Australia's official cash rate at 2.00% by the second quarter of 2015.
Share this

All other countries
by Roger Bridges, Global Rates and Currencies Strategist
10 December, 2014

At Nikko Asset Management, our expectations have been that the Reserve Bank of Australia (RBA) would leave the official cash rate at 2.50% for 2014 and well into 2015. We believed that cash rate rises were unlikely before the US Federal Reserve had started its tightening cycle and the end of the mining boom headwind, which is expected to be most vicious in 2015, was behind us.

Recently, we have seen major collapses in many commodity prices, especially iron ore and coal that are very important for the Australian economy. Although the Australian dollar has depreciated against the US dollar due to the fact that the US economy is performing strongly and the US dollar is appreciating against most currencies, the Trade Weighted Index (TWI) has been more stable. The TWI is a weighted average of a basket of currencies that reflects Australia's exports/imports to different countries. It's often used as an indicator of Australia's international competitiveness and is a useful gauge of the value of the Australian dollar. However, the TWI indicates that the Australian dollar isn't depreciating against other currencies. This has been a major topic in recent RBA speeches and the bank has indicated that it thinks the Australian dollar is still too high and the TWI would seem to confirm this. In the RBA's most recent monetary policy statement, it changed its tone to suggest that a lower exchange rate is likely to be needed to achieve a balanced economy.

The recent national accounts data showed that Australia has had negative gross domestic income growth for two quarters in a row and of all the states, only New South Wales is showing any sign of growth. As a result, we believe that the next interest rate move is now likely to be down rather than up, with the next RBA meeting in February potentially being the time for a 25 basis point cut. Over the past few days, the bond market has started to price in rate cuts. 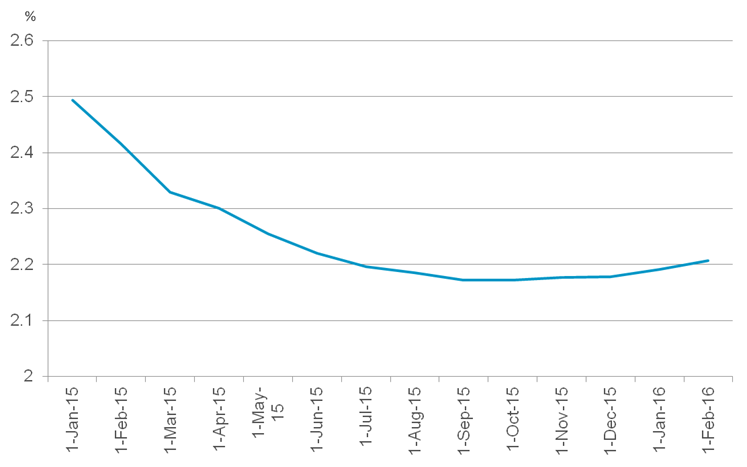 If the RBA does cut interest rates, it is likely that they will make more than one cut, so we could see Australia's official cash rate at 2.00% by the second quarter of 2015. The likelihood of this increased with the 5 December release of the Australian Industry Group/Housing Industry Association Australian Performance of Construction Index, which shows that the national construction industry moved back into negative territory, dropping 8 points to 45.4 points in November, which is down almost 14 points in two months (59.1 in September). It signals the industry's first decline since May 2014.