Official Support for Japan’s “Show Me the Money” Theme?

Update on Japan’s “Show me the Money” corporate governance — the dividend paid by TOPIX continues to rise towards its historic high, but the payout ratio has been stagnant for the past few months, as earnings continue to rally equally well.
Share this

All other countries
by John Vail, Chief Global Strategist
04 November, 2014

As for an update on Japan’s “Show me the Money” corporate governance, the dividend paid by TOPIX (in Yen) continues to rise towards its historic high, but the payout ratio has been stagnant for the past few months, as earnings continue to rally equally well. 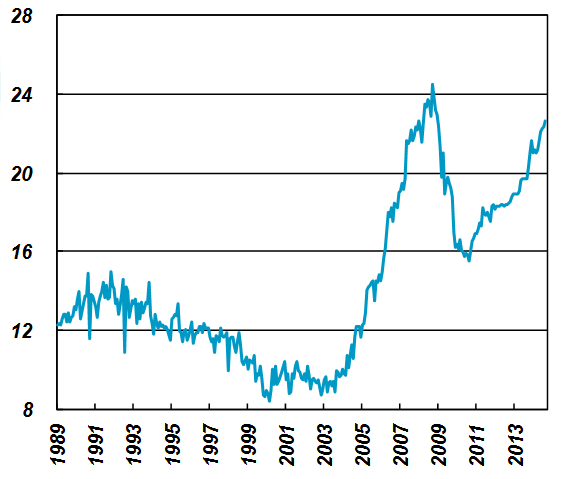 Please note that we measure the payout ratio as TOPIX’s dividend vs. its forward 12 month EPS, as the latter series is more stable than historic earnings. Clearly, this tends to understate the payout ratio currently, but we still find this method more satisfactory. 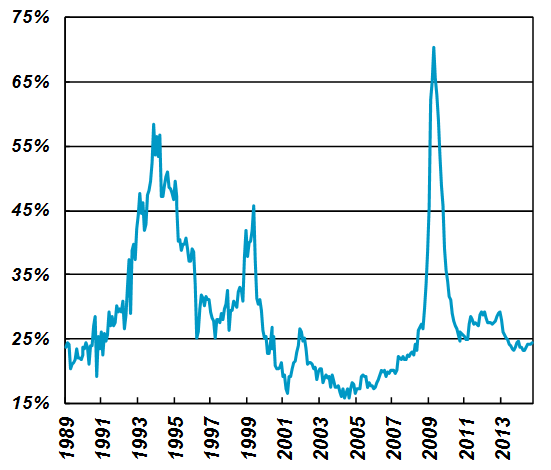 We expect the Abe administration to start emphasizing the importance of dividend payouts, congratulating those companies who raise their payout ratios sharply and criticizing those who do not (unless they are fast growth companies, are “greatly struggling” or already have high payout ratios). The rationale behind such is that most market observers would agree that significant and surprisingly large dividend increases push share prices up quite quickly. Japanese investors clearly appreciate dividend hikes more than share-repurchases, which are ephemeral in nature, in our view. Indeed, not only are retail and institutional (both local and foreign) greatly desirous of higher income, but short-sellers are squeezed, as well. Thus, the political support for encouraging major dividend hikes should be very strong.

A key theme in Abenomics, as well as in the US leadership, is to encourage the stock market to rise in order to create the wealth effect (as well as to increase taxable income in order to reduce fiscal deficits). Of course, bubbles should be avoided, but current valuations are not even close to bubble territory, in our view, and payout ratios are far below the US and Europe (at 37% and 50%, respectively; see our July issue for details), so this theme is an easy method to achieve the wealth effect. Although some companies may resist, there is now a significant trend in Japan towards improved corporate governance, increasingly driven by GPIF’s (and other institutional investors’) demand for higher ROEs. Certainly, Japanese companies should wish to support this effort, especially if it gives them an excuse to reduce large cash positions and reward shareholders in a more aggressive way than they would normally. They have also benefited greatly by tax cuts and lower regulations, and may feel indebted to return some of these “favors.”

Moreover, this would lessen the burden on the BOJ to expand its policy and clearly would not require further public borrowing for fiscal stimulus (in fact it would increase government revenues via taxes on dividends). Many foreign investors would benefit, which might not be a government policy, but Japanese ones would as well, and such would help finally create an “equity culture” in the country, which clearly is a government policy, especially well shown in its NISA program.

As mentioned in our July issue, much like the 2004-2008 period, we expect a continuing surge in dividend growth to lead to a sharp increase in the payout ratio. In fact, we expect the TOPIX dividend to double in the next five years, bringing the ratio to 37%. US companies, driven by corporate option incentives, concentrate heavily on share buybacks, and although such are not a guaranteed return for shareholders, this raises its “total payout ratio” to nearly 50%. Europe also has a 50% payout ratio. Thus, 50% seems an appropriate target for Japan, as well.

Our 37% payout ratio in five years is based upon 6% annual growth in earnings and 15% annual growth in dividends. Extending these trends another five years leads to a 50% payout ratio, thus making it a very plausible ten-year target. Of course, earnings will likely go through a down-cycle over this period, but we expect dividends to be much more “sticky” than they were after the Lehman (and Tohoku) crises. Indeed, these trends are all a part of the movement away from Japan’s “crisis cycle” market towards a more normal market, in which the last decade of restructuring bears fruit for shareholders. As Abenomics brings more confidence among domestic investors, as well as dis-incentivizing cautious investments due to negative real fixed income yields, there is a natural inclination to increase equity investments for the long-term.

While we believe that independent directors and other corporate governance improvements are important, cash dividends are likely to provide the most compelling argument for quickly raising equity prices and for domestic investors to increase their investment risk profile. In this way, a more solid “equity culture” can be established in Japan relatively quickly. Foreign investors will also realize that corporate governance in Japan is a very serious trend (along with the recent surge in profit margins) and gain confidence in the country.

The implications of this trend are huge, as the impact of growing asset wealth and income for individual and institutional investors will be key to the continuing success of Abenomics, so we expect Japan’s leadership to encourage dividends. Legislation is impractical and time consuming, so the powers of persuasion (or castigation) will likely be the method they choose.