Domestically produced goods and imported finished consumer goods both rose mildly MoM. This must be causing much doubt at the BOJ about achieving the 2% Core CPI target.
Share this

All other countries
by John Vail, Chief Global Strategist
24 July, 2014

Japan’s pipeline inflation, which we measure using the recently renamed Producer Price Index’s Finished Consumer Goods for Domestic Demand sub-component (which includes import prices) continued to be quite depressed in June, rising 0.1% MoM and declining to a 1.8% a 6-month annualized basis (both excluding the VAT hike effect). Domestically produced goods and imported finished consumer goods both rose mildly MoM. This must be causing much doubt at the BOJ about achieving the 2% Core CPI target. 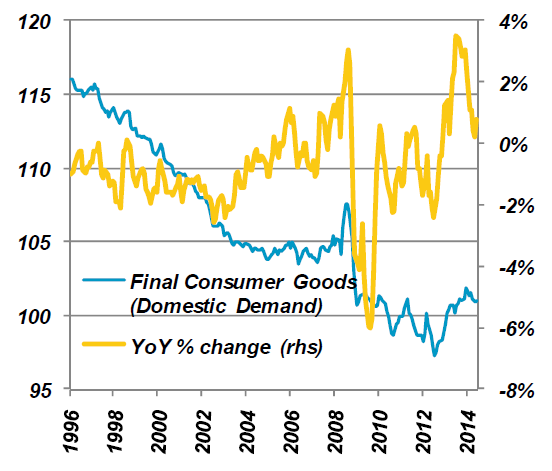 The June numbers for the CPI were not available at the time of this report, but the May data showed the goods portion of the CPI rising 5.8% YoY, but with 3% of this due to the VAT hike. Meanwhile, the “core-core” CPI (excluding food and energy) also surged in May due to the VAT hike, but stripping out the VAT tax, it is only marginally positive YoY. The housing component was flat MoM, while the rent component remained flat MoM again, for the fourth month in a row. Although rent does seem to be bottoming out, it will need to start rising in order for the core CPI to accelerate much further. Rents are not subject to the VAT hike, but most landlords will likely try to hike rents due to the improved economy and reflationary outlook. How fast this happens, however, is a key issue for BOJ policy.

Japan Goods CPI
through May2014 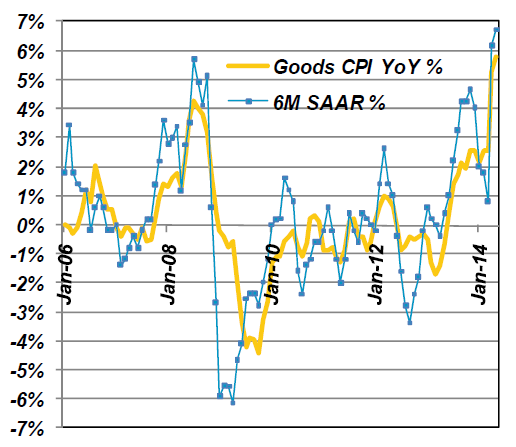 As noted in last month’s report, we believe that the BOJ will ease its base-money expansion plan after this summer as it will become increasingly clear that low pipeline inflation, especially regarding rents, will prevent Core CPI from achieving the 2% (ex VAT) target. If we are wrong about the BOJ, it is likely that, in truth, they are satisfied with the core CPI at 1.5% YoY, which certainly would be a level that the bond market would be more comfortable with.

Lastly, although financial analysts strip VAT out of the CPI, the inflation effect is very real to consumers and as it is likely to continue, they will need to invest their cash assets more aggressively to maintain a constant standard of living.